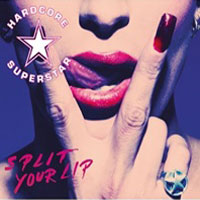 One of the leaders of the sleazy/ metal resurrection in Europe, Sweden’s Hardcore Superstar return with another 11 song record of fury. Multi-tracked background vocals and that raw drum/ guitar sound that makes you feel at home in a dark club just as much in front of tens of thousands during festival season – Hardcore Superstar know how to keep the songs mean, quick and road ready. Not surprising when I hear that they recorded "Split Your Lip" live in a whirlwind five day recording session. Even when the band go acoustic through “Here Comes The Sick Bitch” it’s with that aggressive, pissed off angst that anyone who’s been wronged can relate to.

They lose half a point with me for the prevalent profanity-laced lyrics that could have worked better in smaller doses – we do have plenty of English words to describe negative emotions or people in general outside of curse language. Favorites include the rhythmic beat down “Bully”, an ode to closing time hard rock style in “Last Call For Alcohol” and the emotional, piano led ballad closer “Run To Your Mama” featuring “Jocke” Berg’s most heart felt, belt it out vocal to date for the band.

Imagine if a group of guys decided they loved the Bay Area thrash scene, as well as street acts like LA Guns and Guns N Roses – put in the European charm and there you have the style and substance of "Split Your Lip".