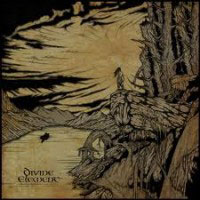 First of all I have to say that I am impressed with the professional package these Greeks have come up with.

For a self released album, the cover artwork and digipack pressing looks better than most label releases I come over these days. In addition the production is not bad at all. Divine Element is a trio hailing from Athens. They were formed in 2003 and proclaim to play music inspired by black, heavy, and thrash metal, with an epic feeling being the factor that ties it all together.

As for the music, it is indeed epically infused with symphonic elements tastefully placed in the background. The epic factors seem to have played its role on the compositional level as well, and this is partly why I lose interest in Divine Element. Their melodic material isn’t strong enough to support the epic feel they try to convey. This regrettably becomes more visible as their songs are long and often repetitive. Their average song length is over 7 minutes, and most songs make me lose interest half way through. With stronger melodies this album could easily have been a surprising debut hit.

If drawing parallels, Divine Element reminds me of early Amon Amarth with black-thrash vocals. If they can produce some Amon Amarth” quality melodies for their next release, they could easily be a band to watch out for, as they have done pretty much everything else right on this release. If checking this album out, start with the song called “Dawn of Battle”.