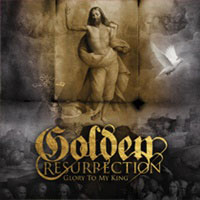 GOLDEN RESURRECTION – Glory To My King

As a teenager watching the expansion of hard rock and metal on a international platform, I remember the first time hearing “I’ll See The Light Tonight” from Yngwie Malmsteen – just knowing that his classical knowledge and fleet of finger power would influence the next generation in immeasurable ways. Looking at this Swedish act, it’s easy to hear his influence among others with their brand of melodic, neo-classical metal. This debut album "Glory To My King" has as much in common with Stratovarius and Yngwie as it does Impellitteri and Rob Rock, a powerful example of positive, charging music and lyrics working for a common goal to energize and move people.

The main songwriters and musicians in Golden Resurrection have years of recording history with other bands under their belt: vocalist Christian Liljegren from Narnia, Divinefire, and Audiovision and guitarist/ keyboardist Tommy Johansson of Reinxeed. Filled out by Stefan Kack on bass, Rickard Gustafsson on drums and Olov Andersson on keyboards, these 8 songs (plus a short 47 second outro titled “My Creation”) showcase dual guitar/ keyboard arpeggio workouts, soaring melodies and a rhythm section up to the challenge with the faster tempos.

Tommy and Olov often spend over half the song in a maze chase to illustrate their neo-classical knowledge – most evident in opener “See My Commands” and “Gods Grand Hotel”. When the band take the arrangement down to mid-tempo terrain, that’s where their love of Rainbow meets Impellitteri comes into focus, such as “Best For Me” where Rickard gains an opportunity to lay off pure double bass exploits and propel with a straightforward sustained groove. My favorite song would have to be the six minute plus “Proud To Wear The Holy Cross” as it’s got that Dio-era Rainbow epic journey feel, giving Christian the spotlight with his multi-octave vocal prowess.

Not a lot of surprises on "Glory To My King", but the performances and overall songwriting outshine what we’ve heard lately in this sub-genre.