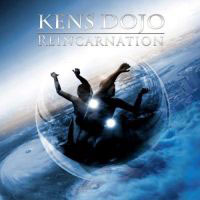 Ken Ingwersen is a busy man in the musical world. He’s a guitarist, songwriter, producer, music publisher, and he owns and run the recording studio Oslo Recordings. He’s working with loads of different musicians, from the disco queen Gloria Gaynor to the hard rockers TNT, to the black metal band Tulus. I was first introduced to Ingwersen with his band Rags, and their second album “Mama Can I” is still one of my favorite hard rock albums from Norway. I also had the pleasure to meet him at Sweden Rock Festival I n2008, when he was touring with Ken Hensley & Live Fire.

“Reincarnation” is a varied album with different singers and musicians, and I’ll go through song by song. “Forever” is a great opener. Kinda laidback, and reminds me a bit of Flow era Conception. Michael Eriksen of Circus Maximus sings lead vocals, and his voice is perfect for this song. One of my favorite tracks on the album. “Keeping the Flame Alive” is slightly heavier. The vocals on this one are done by Pagan’s Mind frontman Nils K. Rue, and it sounds like Ken’s been listening to Queensrÿche’s masterpiece “Empire” when he wrote this one.
“I Surrender” is a soulful ballad, and this time Glenn Hughes (ex-Deep Purple/ex-Black Sabbath) sings lead vocals. Hughes sings like a God, and the song is pure ear candy.

“Reincarnation” is a very laidback song with kind of an ambient sound. Chesney Hawkes is in charge of vocal duties. This is really not my style of music, and I find this song pretty boring. “Momentos A Solas” is a beautiful instrumental track. Lovely and moody guitar melodies performed by Ken, and really sweet fretless bass performed by ex TNT bass player Morty Black. “Demon in Diamonds” is a straight-forward melodic rock song. Actually it reminds me of AOR legends Giant. The vocals are handled by Tommy La Verdi (ex 21 Guns), who is an excellent singer for this kind of music.

“Come Alive” is the most rocking track on the album. It opens with a cool classic Hammond organ, and not surprisingly the B3 is played by Ken Hensley himself. Eirikus Hauksson (ex-Artch) who also sings in Live Fire, handles the vocals. Hauksson is just an amazing singer, and suits the song perfectly. This is also my absolute favorite track on the album. “El Recreo” is a short instrumental with a beautiful guitar melody played over moody synth chords. “Set This Angel Free” is a catchy AOR/melodic hard rock song, and once more Michael Eriksen handles the vocals. This song has a big hit potential.

“Rain” is a cover of the Uriah Heep classic. A beautiful ballad, where Ingwersen himself sings the first verse, before Hauksson comes in for the rest of the song. Siri Dale (actually the singer in Ken’s old band Rags) plays the cello on “Rain”. “Playback Tape” is the last track. This is an instrumental, and Ken really lets loose over the frets. Really cool guitar playing from an excellent guitarist.

All in all “Reincarnation” is a great rock album, even though I don’t like the title track. It’s one of the most exciting Norwegian releases this year, and any rock fan should own a copy of Ken’s Dojo “Reincarnation”.