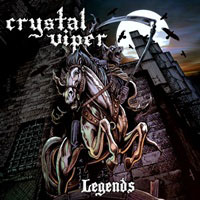 The metal scene appears very healthy indeed in Poland. Regular touring bands often gain the opportunity to film their show and festival gigs there, and we’ve seen the growth and development of various acts from Behemoth to Vader gaining substantial attention and touring opportunities full time. The true metal movement also receives modest appeal, and this is where Crystal Viper reside with their third full length album "Legends".

My first encounter with this quartet would be through a Running Wild tribute appearance, choosing “Libertalia” off their final album Rouges en Vogue. What hits me instantly on the first listen to tracks such as “The Ghost Ship” and “Sydonia Bork” are the convincing melodies of vocalist Marta Gabriel. Unlike the typical gothic female singer who may have a pleasant voice but appears most suitable for popular music, Marta understands the power and heroic mentality necessary to be a heavy metal front person. Special guest appear on the intro “The Truth”, a narrative by ex-Manowar drummer Rhino and “Blood Of The Heroes” with Sinner/ Primal Fear bassist/ singer Mat Sinner among others through the 10 main songs.

Musically the band prefer large hook-laden material of a cultural, thematic nature as well as frequent harmonies in the choruses. Songs such as “Night Of The Sin” with its continual Andy Wave twin guitar refrains and “A Man Of Stone” with its mid-tempo anthem nature recall the greatness of German acts such as Helloween and Running Wild. They end the album with an Accept cover from Russian Roulette, “TV War”, and give this track a little more energy in the Tomasz Danczak double bass department than the original.

Those of you who love German meets NWOBHM with killer vocals and emphasis on retainable songs would be well advised to seek out Crystal Viper and Legends.