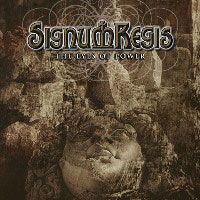 SIGNUM REGIS – The Eyes Of Power

Originality naturally appears a rare commodity in the metal world circa 2010. Especially with so much product hitting the streets from all countries, it’s tough to release something groundbreaking that will make listeners sit up and take notice. Bassist / songwriter Ronnie Konig understands this aspect and set about on this second album from Signum Regis to incorporate a musical texture that mirrors the conceptual lyrics based on the Roman – Persian historical events during the late antiquity in the Middle East (224-630 AD).

Joining Ronnie is a veritable lineup including neo-classical guitarist Filip Kolus, vocalist Goran Edman, second guitarist Ado Kalaber, keyboardist Jan Tupy and drummer Jaro Jancula. The Eyes Of Power contains 9 songs that rely on shorter arrangements (all tracks coming between 3-6 minutes) and the natural skilled talent of the musicians themselves.  “Purpleborn” for instance features fluid progressive bass movements out of Ronnie, stirring solo work out of the Kolus/ Kalaber tandem that include a stair step solo climb and descent and Goran’s multi-layered melodies holding all the action together into palatable form. “Mystical Majesty” features a main riff epic enough to recall the Dio/Blackmore Rainbow mastery years and keyboard sections that keep the early history perspective right on track.

For a change you’ll enjoy on this album more of a natural sound when it comes to rhythm section, as you don’t hear numerous triggers on the snare and kick drums which render most melodic metal albums interchangeable. The instrumental “The Underground Temple” amply gives Ronnie and Jaro front and center attention, snaking its way through another Middle Eastern motif with vigorous finger, hand and limb workouts.

What makes this album most appealing to me? Signum Regis isn’t trying to outplay or outgun the rest of the field. Sure speed and bombast can be impressive in the moment – however focus on the overall final output will gain you a lifetime pass in every listener’s head and heart.

To those of you who want an easier on the ears neo-classical, melodic metal album, The Eyes Of Power possesses all the depth and quality one desires.