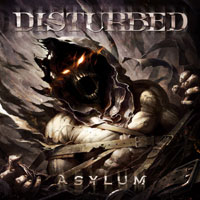 One of the bands out of the American modern metal movement who’ve handled the changing sales climate well – still gathering chart topping action and sold out concert tours – would be Illinois’ quartet Disturbed. If I had to put a finger on why, it would be their ability to employ incessant hooks from both the vocal and rhythm angles- while understanding that in the end, it’s all about coming up with songs. Their latest album Asylum continues in the same mold as previous efforts – 13 addictive tracks that assuredly go for the groove mechanism within your brain and body, lock on and are mighty difficult to leave behind.

There is the occasional experimentation in terms of off time dynamics between the vocals, guitars and drums – most evident in a mid-tempo offering like “Crucified”. The title track features a head crushing riff pattern, plus one of David Draiman snake slithering vocal deliveries that suck you in and mesmerize from beginning to end. Drummer Mike Wengren and bassist John Moyer play an important role in Disturbed – their bottom end thump keeps each song moving along with tightness and more along the lines of classic rock for tracks like “The Infection” and “Another Way To Die”.

David speaks to a marketplace confused and concerned, literally running through waves of positive and negative emotions at the speed of sound with experience and passion. It’s also great to hear guitarist Dan Donegan step away from bar chords and staccato parts to prove he actually has some flair for the solo – and not just in a shred happy manner but actually understanding how to play within the context of time signatures.