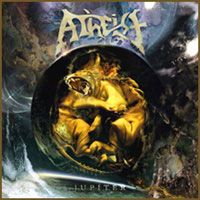 When it comes to technical death metal and the twisted craziness you hear from current musicians who push parameters of theory and skill, they all owe a debt of gratitude for this Florida act. Back in the mid 80’s through early 90’s, their three albums pushed the genre of death metal to levels unheard of – guitars, bass, drums and vocals often running in divergent directions and yet melding into this aural package that gives us limitless inspiration. When reunion shows came about following the re-release of their material a few years ago, long time consumers hoped for at least one more studio record from Kelly Shafer, Steve Flynn and new co-horts Jonathan Thompson (guitars and bass on the album) and Chris Baker.

And now we have 8 more songs with "Jupiter" – a dynamic, forceful and exciting record that doesn’t stain their previous recordings, while also gaining a sense of veteran knowledge to write an album that isn’t regurgitating the past. Let’s get the complaining out of the way if you feel short changed with quick albums – as 32 minutes may not seem like much for Atheist’s first new album in 17 years. By the third song “Fraudulent Cloth” I think I heard according to my calculations enough riff changes and tempo manipulation to stretch out over the course of a normal band’s complete discography.

For the newcomer to Atheist world, imagine the union of jazz, death and Rush from all eras and you may get the flavor for what they are pushing to the world. “Faux King Christ” contains conga-line tempos next to blast beats, circling chord structures and Kelly bellowing words from the lowest regions of his voice and then with thrash-like screams. “Tortoise The Titan” has Jonathan popping out some jazz/funk bass parts while the guitar soloing goes for the slow, emotive bending note effect. And the opening drum run of the album “Second To Sun” proves Steve Flynn hasn’t lost his math mind with older age – it’s only gotten wiser and stronger along with a sense of groove to his timekeeping that maybe I didn’t hear as often in the older material.

I’m hopeful with their second coming Atheist will not return to the catacombs of anonymity as far as consumer appeal. "Jupiter" rocks and astounds, sure to provide tech heads with thousands of hours of enjoyment.