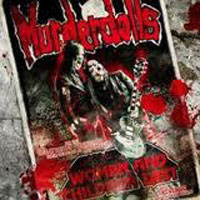 When reading a recent interview with the two remaining original members of Murderdolls (Wednesday 13 & Joey Jordison), my anticipatory antennas was thoroughly raised, as they proclaimed that their new album was more ferocious, more brutal yet more glam and sleaze at the same time. Was this usual preconstructed promo-blabber, or have Murderdolls actually raised the bar further for the band? 7 years in the making should certainly have given the band more than enough time to improve their formula. Indeed, the formula has been improved, the bar has been raised, and Murderdolls have released a second album that eclipses their first album on every aspect.

First of all, for those of you who reminisce about the heydays of glam, when bands such as Mötley Crüe, W.A.S.P, Skid Row and Alice Cooper were at the pinnacle of their careers, for those of you who think all glam bands since that era has been nothing but soulless unoriginal copycats, the wait is over. Murderdolls don’t just take inspiration from these former acts of grandeur, they bring glam and sleaze into the 21th Century. “Women and Children Last” have the melodies to make glam-lovers proud. Still, it is more brutal and hard hitting than its predecessor. Personally, I think this harder side to the band is just what they needed to really show the world that glam and sleaze can still be kicking ass.

Some songs are borderline pop with their candy coated all-song choruses. Tracks such as “Nowhere” and “Summertime Suicide” is almost too sweet for my taste, though probably very suited as party hits and radio fodder. On the other hand, there are ball busting songs to make for a nice balance and variation on the album. “Chapel of Blood”, “Drug Me To Hell” and “Rock n’ Roll is All I Got” really showcase the band at its most kick ass so far in their career.

The production is also immensely improved on “Women and Children Last.” It is still not clinical, but has the right amount of filth and dirt that a proper sleaze band need. The album has a lot more punch than their debut, and it suits the band perfectly.

So why doesn’t this album score higher? The main reason is that one half of the album is really good, whereas the other half is forgotten as soon as it was played through. The previously mentioned 5 tracks, along with “Death Valley Superstars”, “My Dark Place Alone” and “Nothing’s Gonna Be Alright” is top notch stuff. The rest of the songs, such as “Bored Till’ Death”, “Pieces of You” and “Blood Stained Valentine” come off as anonymous fillers. I rate Murderdolls’ first album to 3.5, and have therefore added one point on the account of their improvements. If they can improve just as much till their next album, I predict a future classic in the making.

Understand me right. As far as sleaze and glam metal goes in the year 2010, Murderdolls are the king of the hill.

MYSTERY – One Among The Living