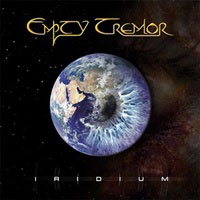 Following the release of “The Alien Inside” featuring former At Vance singer Dustin Hartmann on main vocals, I wondered whatever happened to this impressive Italian progressive metal band.  Since their last album hit the market in 2004, main mentor and keyboardist Daniele Liverani left the band a couple of years later – as well as drummer Stefano Ruzzi. Picking up new members and playing out as a cover band to keep their chops sharp in the interim, former vocalist Gio De Luigi returns on this fourth album “Iridium” – and what a thorough, complete record we have on our hands.

Let’s get the obvious out of the way. A lot of the dynamic instrumental interplay between guitarists Christian Tombetti and Marco Guerrini, keyboardist Marco Scott Gilardi, bassist Dennis Randi and drummer Dario Ciccioni isn’t that far out of the realm of what we’ve heard from Dream Theater, especially their “When Day and Dream Unite” through “Awake” time frame. And yet when they change things up, especially through the slower, acoustic laden opening of the epic “Warm Embrace” you feel like you are listening to more of a classic AOR meets 70’s progressive influence, where Gio grabs the listener’s ears with an emotional, compelling build up of his melodies not dissimilar to the finest from Journey or Kansas,

A lot of the background vocals contain large harmonies in the vein of Shadow Gallery or maybe a lighter side of Queen – adding another mood dynamic to guide you on your Empty Tremor trip. Tracks that resonate deep with me through multiple playbacks include the Middle Eastern progressively charged “Autumn Leaves” accenting the jam proportion keyboard/drum connections and off time meets commercial madness within “The Last Day On Earth” where smooth vocal harmonies blend seamlessly next to drop on a dime time signature maneuvers and funky bass solo action.

There isn’t a filler cut out of the 9 – and Empty Tremor also are willing to experiment between shorter, tighter songs within the 4-5 minute time span as well as the longer tracks where the six piece get a chance to flex their creative musical muscles. If you’ve enjoyed this band at any time, “Iridium” is essential – and if you remotely enjoy progressive metal, this album also gains the essential stamp of approval.

ALL ENDS – A Road To Depression