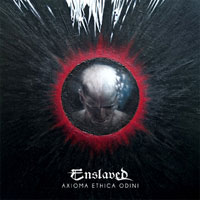 Different, and again we experience a different aspect of Enslaved. The former brought the band into a harsher world of Pink Floyd, with dreaming songs and a softer expression, while this new recording is harsh. Melodies all over the place, yet it never feels soft.

Clean vocals, and again we experience clean vocals on a high level in Enslaved. They were clean and, again, soft on "Vertebrae". They’re still clean, hence tagging those ‘clean vocals’, but at the same time they’re very different. Ivar Bjørnson told us that Herbrand Larsen’s girlfriend, after hearing the new album, wondered if Herbrand didn’t do any vocals this time. And fact it, it doesn’t sound like Herbrand in comparison. But joy, his voice do again lift Enslaved from good to very good.

Grutle, and again Grutle screams his lungs out. Grutle Kjellson, the screaming man… Somehow "Ruun" didn’t do that much to me, I think he sang way better on "Vertebrae", but now, with "Axioma Ethica Odini" his harshness feels there and then, if you see what I mean. In the opening of "Waruun", it’s like he stands there right next to me, screaming straight into the depth of my fucking soul. It’s not that he screams his lungs out all the time, but harshness can be found in different tongues. His voice is sneaking upon me at the same time as it feels like a sledgehammer hammering me to the, ahem…, ground.

Music, and again I think a bit Neurosis’ music when I listen to Enslaved. Now, don’t think of that as a bad thing, because Neurosis are the best at what they do, just as Enslaved are the best at what they do. Do do dodeli do – in any melody, but most likely not in the world of Enslaved. Slow and heavy, such as in the immense "Giants" (immense giants, now ain’t that adding too much sugar?). And those vocals… The English language consists of more than 200.000 words, as far as Wikipedia knows, and still I can’t find the right word to describe the chilling experience it is to listen to "Giants". And Bekkis’ drumming on this specific track… Ah, if you listen solely to them for a minute or 6.37, you will, probably, feel like being hit by a big truck. Not necessarily an 18-wheeler, but still one weighing more than 3.500 kg.

Crawling, and again a seemingly monotone record is crawling up my back only to stick its needle into my skin. Yes, be patient and let the album sink under your skin. After all, instant albums are often like instant coffee – easily digested and easily forgotten, and the taste is not really your cup of…, well, tea. There are some parts, few in number, where I think, "ok now, the meditative effect works most of the time, but there are some sections where I feel that a small change in direction would help". Which is also why this album doesn’t reach up really high. Aside from this, there’s nothing I’d change on "Axioma Ethica Odini". Enslaved has once again proved that they’re a band standing very tall in a metal scene where most bands just do what they do, while Enslaved, of course doing what they do, do something different from album to album, yet still manage to make everything fit well into the Enslaved-universe. Do do dodeli do… …in different tongues.

KAMELOT – Poetry For The Poisoned