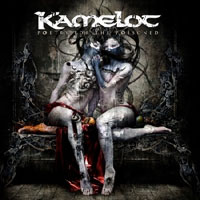 KAMELOT – Poetry For The Poisoned

The man with the voice and his American friends have toured intensely since their previous "Ghost Opera" as well as having written a new album. Where the said "…Opera" was a simpler album coming to the structure, even though it has grown on me year by year, the new album is a varied tour through different landscapes. Take the second song "If Tomorrow Came". Now, if the refrain doesn’t bring back memories of 80’s pop, then nothing does. The song is catchy and groovy, but the refrain comes out of nowhere. I’m still, after numerous spins, in confusion and I’m not sure whether I like this or not…

Then you have "The Zodiac", which features Jon Olivia. The music itself, a midtempo monster, doesn’t really do that much. But the duel between Khan and Olivia is definitely worth the while and makes "The Zodiac" a standout track on the album. The following "Hunter’s Season" is perhaps the album’s weakest point, being a song that feels too long and that doesn’t have any special moments. I can understand why Kamelot needs a more standard song after the previous tracks, since being varied is one thing, but having only songs that do not fit into the A-4 Kamelot universe is perhaps not the wisest move seeing it from the fans’ point of view. Therefore it’s great for the said fans that Simone once again sing on a Kamelot album, and this time on the ballad. "House On A Hill" is not as good as "Love You To Death" from the former full-length, but it does its job.

After the two tracks, "Hunter’s Season" and "House On A Hill", that have placed the music into safe Kamelot territory, the band continues its mission of making an album that will demand something from the fans, being that "Poetry For The Poisoned" is not a typical Kamelot-release. "Necropolis" is a catchy tune and doesn’t really bring back memories from other Kamelot tracks, in contradiction to "My Train Of Thoughts", which brings us back to safe territory. But fear not, Kamelot has decided to challenge us more than one could expect, with the fine "Seal Of Woven Years". Beautiful refrain, great symphonic elements and a track where Khan sings so well that I’m almost getting tears in my eyes.

Does the latter mean that he doesn’t sing as well on the rest of the album? Well, there are times when I think the vibrato should’ve been tuned down to nothing. You know, when you first notice the vibrato you have to work hard to think of different aspects with the music. The strange thing is that he doesn’t use it all over the place, just here and there. And every time he sings the first line in the otherwise fine closer "Once Upon A time", where he goes vibrato on the last word that includes some "…sskkkkiiiiiiiiiiiii…"-kind of thing… Music does NOT become more emotional just because you use the vibrato in your voice. This contradicts when he sings low on the closing part of "Poetry For The Poisoned". Singing "Down by a lake…" is the highlight on Khan’s singing this time… Make sure that you don’t fall into the same trap as I do, by noticing what you don’t like too much (vibrato, in this case). The female vocals in the four-part title track is…, uhm, I’m not really sure. Do Simone Simmons and Amanda Somerville sing as they do due to the lyrics or because they want to express something else? I’m not sure, but in "Pt. II: So Long" when "…we can hide" is sung at ca. 1.10 miutes, the last word feels so much out of place. It’s in fact annoying and it’s like I’m feeling a desire to skip this otherwise perfect track just because of this and two other similar lines in the song.

Thinking of the closer part of the four-part titletrack, I don’t know why they chose to close the album with "Once Upon A Time" instead of "Pt. IV: Dissection". Maybe they wanted to end the album on a lighter note…

"Poetry For The Poisoned" is a surprisingly varied album which makes me realize that what you can expect from Kamelot is the unexpected at the same time as the Kamelot sound is all over the place. The album feels like a grower. And with the vocals being 90 % top notch this is another fine Kamelot rocker, "Poetry For The Poisoned" is one more for my Kamelot collection, despite the few annoying moments.