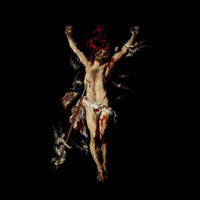 The kings of New York Black Metal have returned!

Profanatica have quite the history. Following a dispute with their previous label Osmose the band split and their supposed debut was released under the wings of Candlelight Records as the debut of Havohej, Ledney’s main project at the time.

Since their reformation in 2001 the band has released two albums, both through Hells Headbangers. I missed their previous album so this one, their official second one, is my first introduction to modern day Profanatica.

The minute you put on "Disgusting Blasphemies Against God" it’s "Dethrone the Son of God" time! OK, add a bit of bass to it and it’s pretty much the same. Listening to this album just takes me back to the times when I used to watch footage from the band’s early ’90’s shows. This material could very well have been there on some of them, in between the WWF-pummelling of small dolls.

Having gone over this album more than a few times I have yet to find any major changes in the style. This is just down to the core Profanatica with all their lust for sodomizing girls! Is it a good or a bad thing? Well, we do have more than enough bands out there eager to rediscover themselves with each release, Profanatica, it seems, is one of the bands that choose to keep their brand of Black Metal a down to the basics approach.

One thing though, Profanatica have always been very repetitious and pretty much have gone on raping the shit out of each riff. So much so that it has probably caused many fans of Tech-Death to off themselves in despair. On this album you will find a bit them taking that concept even further with their already repetitious Black Metal.

No trumpet shall sound.