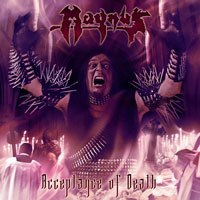 Magnus, by the bliss of it all, was one of the first bands from Poland I heard about. An amusing fact considering the fact that "Acceptance of Death" is the first time I hear the band’s music!

Magnus is one of Poland’s old hordes, formed in 1987. Like many of their generation they hit the sack in the mid-nineties and woke up again with this, the band’s debut for Witching Hour, although the band released three other albums during it’s heyday.

What we have here is Deathlike Thrash Metal, hard and heavy with a bit of Bay Area (Machine Head) influences. The vocals of Rob Bandit remind me heavily of the vocals of Piotr from Vader. So much so that when "False God" started I wondered if there had been a bit of a mix up, if I had gotten a Vader cd instead of a Magnus one.

Twenty three years since the first demo and I’m sure Magnus were just as fierce then as they are now. This is a good album for people that can’t get enough of the Vader sound and have always wanted to know how things would be with a different take on it.