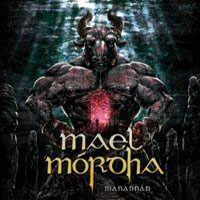 In what seems now rather apt circumstances I was first exposed to and impressed by Ireland’s Mael Mórdha supporting their Celtic cousins Primordial in London a few years back, for which following that gig was thoroughly thankful at having purchased the band’s 2007 album, "Gealtacht Mael Mórdha". Doomy, genuinely passionately Celtic and broadly epic in scope, "Gealtacht…" represented a band already with a unique sound and worthy of their place in Primordial’s vast shadow on a path that "Manannán" continues to explore. However it is the choice, intentional or otherwise, to copy so much from Primordial’s rulebook that is my lasting memory of the slightly disappointing "Manannán", especially when placed in comparison to "Gealtacht…".

In Roibéard Ó Bogail Mael Mórdha possess a powerful and uniquely-voiced frontman that from the outset of opener "Through The Lungs Of The Dead" leads through the predominantly faster beatings of his bandmates belying the ‘doom’ tag I and many others have labelled on them. "The Summoning" is when the more commonly-heard MM sound is revealed, one played at a slower pace ala Doomsword and reliant on the images conjured by every word and hammered riff heard, but to say songs like these and the obscenely Primordial "The Doom Of The Races Of Éire" outdo "Atlas Of Sorrow" from "Gealtacht…" just doesn’t feel right to me. Not ones to give up lightly mind you, through the subtly evocative title track and beyond Mael Mórdha’s intense atmosphere starts to grow in the truest of metal nature, sans keyboard, putting to shame most soulless key dwellers out flooding the landscape thanks to the exposed, warm natural feel of the production which provides us listener a difficult task in every truly writing off these stalwarts of the Irish scene.

Though far from being a mere Primordial clone, Mael Mórdha instead sit comfortably in a vice’s position as representatives of what Irish metal can offer. Never will they reach the heights of their more illustrious brothers but one listen to "Manannán" should be enough to convince anyone with an interest in either epic doom and folk metal that here lies a worthy purchase and a band that in the past have never reaped the successes they have deserved.