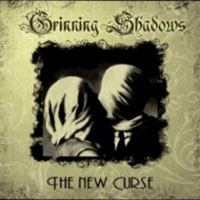 A band like Italian gothic/black metallers Grinning Shadows is one where reviewing credit must be given to the overall acceptable standard of songwriting, performance and production throughout third album "The New Curse", but when it comes to extracting any form of reaction or emotion from me, well I admit to being left totally dry. Mixing melodic death metal style riffs (think an Arch Enemy-lite), a sugary synth and keyboard sound and Christina Scabbia-esque plain female vocals in tracks like "If" the final composition invariably ends up reeking of ‘garage band demo’ in execution. From a number of listens to the 5-song 29-minute release (does that even count as an album?) I have searched for any real emotional interaction within the songs but I’m left with the title of the ‘album’s’ weakest track, "Missing". If any further confirmation were needed of the amateur construction of songs within "The New Curse", "Missing" is in it’s first half would serve as an ideal candidate as an inorganic drum sound and uncomfortable mix of vocal styles render it’s 7 minutes a struggle to endure on a third or fourth listen.

On the surface Grinning Shadows probably do appeal to fans of a more modern style, and in fact many on a local scene will like it, but trust me when I say this will not stand the test of time nor does it possess the ability to transcend feeling internationally. Three albums in, Grinning Shadows don’t have the chops on the basis of "The New Curse" to rise above the murky waters of local support act and reach that fabled Promised Land – show headliner.