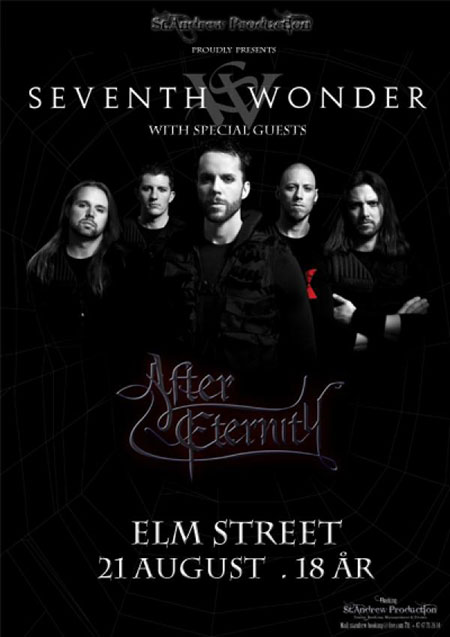 The music turned towards the progressive side of metal and as the band was joined by keyboard player Andreas Kyrt Söderin late 2000, the new sound was cemented further.

Two demos were recorded, the first in 2001 (Seventh Wonder) and the second in 2003 (Temple In The Storm), both of which received good press.

Many singers have come and gone in Seventh Wonder over the years, among others Ola Halén of power metal band Insania Sthlm. The longest living member in the past was Andi Kravljaca (ex: Heave, Elsesphere), and it was with Andi at the microphone that the band recorded their debut album Become (released in 2005), after landing a record deal with Finlands Lion Music.

Become was well received by the press and top scores were given everywhere.
However, the band and Andi decided to part ways shortly after the recording process had ended and once more the search for a singer started

The brilliant Tommy Karevik (ex: Vindictiv) was spotted and he joined the band in 2005, actually prior to the release of Become.

The next album entitled Waiting In The Wings was recorded in 2006 and was mixed and mastered by legendary Tommy Hansen.

Seventh Wonder spent 2007 playing all over Europe and writing the sequel to WITW. The third album was titled MERCY FALLS and released during the all of 2008

It has been 1½ years since Mercy Falls and after extensive touring all across Europe the band is once more in the studio to record a new album scheduled for release September 2010. Stay tuned!