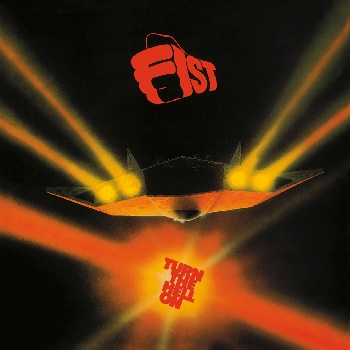 Fist – one of the many groups that emerged during the New Wave of British Heavy Metal era back in the late 1970’s and early 1980’s. Despite the strong support they had from the critics, the band failed to gain the popularity they deserved. And today Metal Mind Productions presents the exclusive re-release of Fist’s debut album from 1980 – "Turn The Hell On" – which brings back a true heavy metal legend.

The band was originally formed in April 1978; at that time they were known as Axe. In 1979 the group reformed under a new name – Fist. Their first single – "Name, Rank and Serial Number" (April 1980), immediately catched the attention of Sounds music magazine, who gave the song a very good review, recognizing the group’s impressive potential. This paid off really well for Fist, as they were soon offered a recording deal by MCA. By the end of 1980 the band released their debut LP – "Turn The Hell On". With twelve ferocious tracks, Fist (at that time consisting of guitarist/vocalist Keith Satchield, bassist John Wylie, drummer Harry ‘Hiroshima’ Hill and guitarist Dave Irwin) delivered a well-balanced dose of prime heavy metal. The reviewers once again valued the group for their work, praising the musical content (especially the catchy choruses), as well as the lyrics, which were a breeze of fresh air compared to the typical, cliché heavy metal topics that other bands sang about (like the occult, for instance). Fist’s songs often dealt with surprising themes, such as fear of flying or suicide. Unfortunately, the band’s debut offering did not achieve commercial success and MCA dropped Fist from their roster in early 1981. The group went on hiatus for a short time but returned in 1982 with their second album called "Back With a Vengeance" (Neat Records). Same as with their first LP, Fist had a great feedback from the critics but commercially their album went by unnoticed. In late 1982 the group decided to call it quits… This, however, was not the end of Fist. In 2001, two members from the 1981-82 line-up joined forces with a another two veterans from the band Hollow Ground to form a completely new incarnation of the classic heavy metal formation. The new and improved Fist released an album called "Storm" in 2005, bringing a sound that was heavier than anything they ever recorded in the past. Since 2006 the band remains silent…

"Turn The Hell On" was never given the proper acclaim at the time of its release. This exclusive re-issue, enriched by two bonus tracks, takes another glimpse at this long forgotten classic, showing its true, marvelous face – the face of heavy metal. The new digipak edition is limited to 2000 copies. Remastered using tube technology, digitally edited on a golden disc. The release date is scheduled for 6th September in Europe and 9th November in USA (via MVD).

Fist "Turn The Hell On" (remastered)