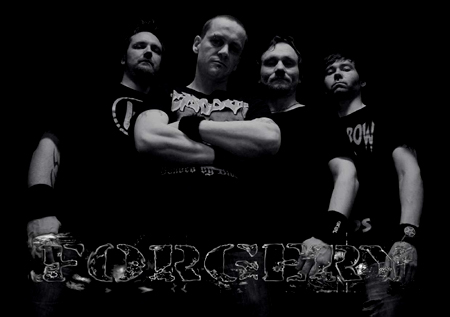 Forgery is a four-piece band playing hard, fast and uncompromising thrash metal. The band was originally formed in the summer of 1990, but went into hiatus in the mid-nineties, after a couple of demo releases.

Resurfacing with a new drummer in 2002, Karl Jonny Lervåg (ex-Paradigma), they went back to the drawing board to come up with an even harder and more uncompromising style, incorporating the honest aggression and brutality of the legendary Bay Area bands with a more up-to-date sound and incorporating more diverse musical influences.

Armed with new material, Forgery recruited a second guitarist, Ronny Hansen (ex-Enthral) in 2004, and have since been concentrating on writing and recording new material, as well as tearing up the live scene in Norway, both on their own and on festivals like Inferno. In the summer of 2006 they recorded their first ever full-length album entitled CORE, recorded and mixed at Strand Studio.

The album however was never released and in 2006/2007 KJ decided to leave the band due to personal reasons. In the search for a new drummer Forgery ended up with Jan Roger Halvorsen (ex.Old Mans Child, drums on Rotting Christ album "Khronos", session drummer for Zensor, 54). His impressive playing gave the band excellent opportunities in the making of new material. Forgery changed from being a pure thrash-metal act to a band mixing different genres in metal. Spring of 2009 Forgery signs with Nocturnal Art Productions/Candlelight Records and their debut-album entitled "Harbouring Hate"
is on the way and the band is yet again in concert-mode, and are looking forward to destroy the peace and wreak havoc where ever they go.