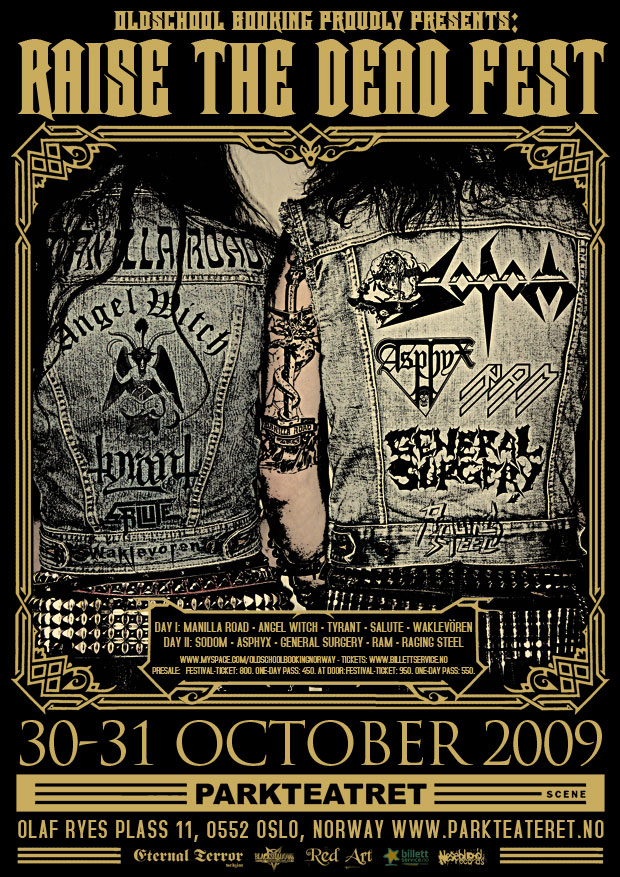 This will be a festival that will bring you back in the days and also introducing some new acts to look out for.
Old School is back to stay!

Tickets are available at www.billettservice.no

One of the most legendary epic metal bands is for sure Manilla Road. Guitar player and vocalist Mark Shelton created the band in 1977 together with a few of his high school friends. Manilla Road released their two first records on their own label, but the following records Crystal Logic and Open The Gates really
defined the bands epic sound. These records are truly classics even though it would be a big lie to say reviews were overwhelming. Manilla Road’s albums mostly suffer poor production and the magazines loved to hate the band during the eighties. But
hey – try to get the original LP’s for a decent price today. No chance! Line-up changed through the years, but Shelton kept on releasing epic metal. After
The Circus Maximus in 1992 even Shelton got enough and the band was dead for nine years. In 2001 he got the spirit back and released Atlantis Rising,
and five of total fifteen albums are released after the reunion. While Manowar turned their epic metal into a circus, Manilla Road presents epic!

It was early eighties; a young Tom Angelripper was working in the coal mines in Gelsenkirchen, a part of the German Ruhr area.The future didn’t look bright, and Tom and some friends did their best to get rid of some aggression by playing music inspired by their favourite bands Venom and Motorhead. Not only was this the birth of Sodom, the term German Thrash metal was born! Along with Destruction and Kreator, all three pioneers of the genre still deliver top score thrash metal. Quality never dies! After 25 years and 12 studio records, Sodom is ready to hit you in the face with their iron fist at Raise The Dead.
Are you really staying home when formers of a genre are coming to town? Watching TV with mom while Tom Angelripper is ready to drink you under the table? Jogging in the forest when you can spend the calories to headbanging and lifting beers?
No, exactly! We thought so…

Why are some of the New Wave Of British Heavy Metal bands among the biggest bands in the world today, while others are hardly remembered? Quality you said? Ok. But for Angel Witch it could be a step to bigger success to not split up all the time. Like the first time, right after the start in 1977 under the name Lucifer, when drummer Steve Jones quit to form a band with Bruce Dickinson!
Founding member Kevin Heybourne (guitar and vocals) soon reformed the band under the name Angel Witch and released the self-titled debut in 1980. Don’t tell us you call yourself a heavy metalfan and don’t have this classic in your collection! More line-up problems and bad luck followed and Angel Witch only released two more studio albums, Screamin’ And Bleedin’ in ’85 and Frontal Assault in ’86. Due to this, numerous live albums and compilations are released later. During the nineties nothing much happened, but Heybourne has kept the band more or less alive with some live appearances every now and then. Be sure to experience one of the biggest hidden treasures in the heavy metal history,
you never know when they will split up again!
You’re an Angel Witch – You’re an Angel Witch!

Already before their first album The Rack, Holland’s Asphyx were truly world famous.
Through tape trading, flyers and fanzines most of the underground knew their logo or had a copy of one of their demo tapes. The Rack was released on Century
Media in 1991 and Asphyx were absolute among the elite of the huge raise of death metal. This lead to tours with among others Entombed and Bolt Thrower and
the band kept on releasing quality death metal the following years. Sadly, line-up problems have followed the band since the very beginning, and after the third self-titled album Asphyx was disbanded for the first time. In 2000 the band seemed to be dead forever, but seven years later founding member Bob Bagchus reformed the band with Wannes Gubbels and Martin Van Drunen (ex-Pestilence), who already had been in and out of the band in their earlier days. New guitar player is Paul Baayens, who some may know from Thanatos and Hail Of Bullets.
For the nerds it can be mentioned that no members has been playing on all the releases, as Bagchus quit the band before the recording of the already mentioned self-titled album in ’94. The reunion was only meant for a few shows, but last year some new songs popped out of the hat and this summer you’ll find Death…The Brutal Way in the stores. And that’s for sure what it is, the brutal way. I guess last year’s appearance on Hole In The Sky, or wherever you’ve seen them
live lately make you believe us!
This will also be the last gig for ASPHYX this year and they have promised a very special show!

Tyrant’s history started 3 years ago in Eskilstuna, Sweden. Members from among others Dellamorte, Insision, The Black and Krypt Of Kerberos thought it was time to reclaim the flame of raw and filthy metal., like Venom, Bathory, Discharge, Motörhead and Hellhammer once did. So far Tyrant has one album, Reclaim The Flame, released in 2007. Later the band has toured Europe with bands like At The Gates, Gorogoroth and Demonical. Also Hole In The Sky, Party San and Festung Open Air have been honoured by gigs by the Swedes. Bass player Daniel Ekeroth also wrote the book Swedish Death Metal.
At the moment, a split-12” record with Alehammer is set for release on AgiPunk during the summer of 2009. Reportedly, Tyrant meets up regularly at their rehearsal
space, but hardly ever touches their instruments as they prefer to drink and raise hell instead. This is as genuine as you will ever get your metal. There are but three codes: raw, simply and ugly.
Old school?
New school? Fuck that, Tyrant didn’t go to school!!

We heard you! A festival without some real gory death metal? Hah! Swedens General Surgery has sharpened their scalpels and is ready to make a bloodbath in Oslo this weekend! Formed in 1988 the bloody Swedes ruled the underground with demos and ep’s until their first album was released in 2006.
In March this year their second full length Corpus In Extremis: Analysing Necrocriticism found its way to the stores. Problem with the albumtitle? Try the songtitles…

In 1999 guitarplayer Harry Granroth was tired of the metalscene and its ongoing trends and decided to form a real heavy metal band. For Ten years and two albums RAM has proved that there is a market for true heavy metal far beyond their hometown Gothenburg.
Delivering a devastating metal crusade over Europe, the band spread their new wave of traditional         heavy metal to places like Greece and Spain as well as touring Scandinavia with Gamma Ray. Earlier this year
RAM signed to AFM records and released Lightbringer in June. Is it necessary to ask if you are ready for twin guitars and screaming vocals? The only bad thing
about Lightbringer is that leatherpants are not included, so get your own leatherpants, buy a beer and bang your head like its 1985. Forget moshpits, wall of death or whatever they call it nowadays.

Salute is the sound of killer beats played on mean streets; old school 80's sound combined
with the rite stance and dangerous execution. If you listen to their two albums, Above The Law and The Underground you may see yourself that these guys
are not joking, combining traditional metal with heavy and raw sound. As the band say; Salute laughs at wimp metal, bad punk and scene attitude; as original
as are genuine, with Salute the UK has finally a worthy band in the fucking underground.

One could say Waklewören is back where they belong. Formed in 2002 by ex- Trashcan Darling’s guitarplayer Bored (at that time working at Elm Street) and ex-Fuck You All screamer Gorgon V (at that time hanging out at Elm Street!), longing for recreating the 80’s sound from bands as Anthrax, SOD; Agnostic Front,Slayer and Crumbsuckers. Bølla Brandt (Red Harvest) was a longtime friend from the same town as the former duo and didn’t hesitate to join the band, and after a drunken phonecall his Harvest-mate Bolt Bergsten was hired. Apollyon (Aura Noir, Immortal, Cadaver etc) also worked at Elm Street and joined the forces on drums.
Three years later, thousands of beers and a few rehearsals made the band ready to record their fist album. The release party was of course at… Yeah, that’scorrect, Elm Street, the 25th of November 2005.
The band kept on spreading their crossover with Norwegian lyrics from the stage and in 2007 it was soon again time to enter the studio. This time with new bass player Bestial Tormentor from Infernö and Lamented Souls. The ep Tiden Lager Alle Sår showed the band stronger than ever and Wakleworen promise they’re still hungry. And Older! We have to warn you, this music is harder than any fist you’ve ever got in your face!

Raging Steel is a 4-piece band that plays raw and aggressive thrash in the same spirit
as the old Slayer and Possessed.They builded the band fall of 2008, but started up playing spring of 2009 when the full line-up was ready, and after just a few months they have released something you should keep your eyes out for: “Guilty As Charged.”