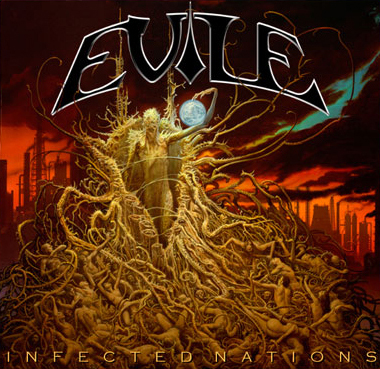 British thrash masters EVILE are ready to reveal to the world their brand new album, INFECTED NATIONS, which is due to be released on September 21st in Europe and on September 22nd in the USA.

Following EVILE's 2007 debut, ENTER THE GRAVE – an homage to the thrash of past – the band are now hitting out and marking a new milestone of their own with INFECTED NATIONS.

"We can't wait for everyone to hear our new album, when we did Enter the Grave two years ago it was made up of songs we had been playing for a few years and some written in the excitement of actually getting to record an album, we were happy to just be making noise but since then we've learnt a few things and we're more interested in making music.  Evile fans can expect to hear a more mature offering, an album that concentrates on all aspects of what each member can do; it's a heck of a lot more focused, more satisfying and we're really proud of what we've achieved with it.  Russ Russell has helped us to push ourselves to the next level and pull us out of the '80s.  The whole retro thing has been cool but we feel it's time for us to leave that behind and stand up for ourselves and show people what we can really do, but fear not, it IS a thrash metal album, it is a 2009 thrash metal album, and we're dying to blow your minds with it."

INFECTED NATIONS was produced by RUSS RUSSELL (NAPALM DEATH), with the cover art created by MICHAEL WHELAN, famous for his sci-fi artworks along with classic album covers from such bands as SEPULTURA and OBITUARY.

"When we were thinking about artists we could approach for the album's art, we went through many ideas and avenues.  One day I was listening to 'Beneath the Remains' by Sepultura, and whilst looking at the artwork, I thought how much that simple yet detailed art really compliments the music.  I thought "How good would it be to get Michael Whelan to do an original piece?".  I think Matt said something like "Haha yeah, like that'll happen", so as you do, I contacted his manager and got in touch with him.  It turned out he was really interested in the concept of the art and jumped right on board.  I think an album's art is just as important as the music on the disc, so I couldn't be happier with it.  Can't wait to see it on vinyl (with a backpatch maybe?).

"It's such an honour to have a legendary, outstanding artist work with us on a brand new original piece, when just months previous to it starting, we thought it impossible.  Thank you Michael for giving the album even more depth and meaning!"

You can also check out a video of OL DRAKE revealing and discussing the artwork at http://www.youtube.com/watch?v=vqTzI7gQG2c

The full track listing for INFECTED NATIONS is as follows:

For more EVILE news and info, head to http://www.myspace.com/evileuk