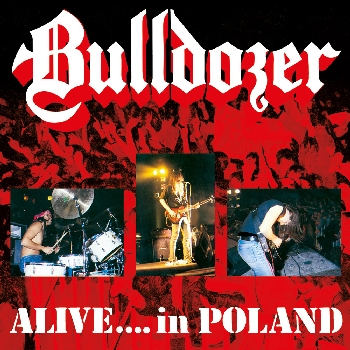 Metal Mind Productions presents re-release of Bulldozer’s live album “Alive… In Poland” recorded in Zabrze, Poland in 1989 in front of 6,000 devoted fans. The enthusiastic reaction of the fans, well heard on the album, proved the undying cult of Bulldozer and their major status among thrash metal bands worldwide. The Italian heroes earned a proper farewell by their audience. As Alberto Contini states, the group was terminated at the right time, with all the band members stepping down from the scene as heroes in glory. This did not, however, dissolve the cult that formed around Bulldozer – to this day the group is considered one of the most influential thrash metal icons ever to emerge on the scene. The album will be available in a new digipak edition limited to 2000 copies. Digitally remastered using 24-Bit process. The release date is set for 6th April in Europe and 5th May in USA (via MVD).

Label: Metal Mind Records
Cat. No.: MASS CD 0997 DG
Barcode: 5907785028821
Format: CD Digipak (limited edition of 2000 copies)
Genre:  thrash metal
Release date: 06.04.2009 Europe / 05.05.2009 USA
Tracklist:
1.IX
2. Desert
3. Ilona the Very Best
4. Impotence
5. The Derby
6. Heaven’s Jail
7. Minkions
8. Mors Tua Vita Mea
9. Overkill (Motorhead cover)
10. Willful Death/You'll Be Recalled
Bio
Bulldozer is one of the oldest and most respected thrash metal bands from Italy, achieving worldwide acclaim during their inspiring career. Formed at the end of 1983, the group sprung out with an intriguing single "Fallen Angel/ Another beer…", which set a whole new standard for extreme music in Italy at that time – as band leader Alberto Contini (aka AC Wild) admits: "There were a lot of bands but only us and Necrodeath were extreme". After some changes in the line-up, with Dario Carria (bass) and Erminio Galli (drums) leaving to form Neurodeliri, Bulldozer, fronted by Don Andras on drums, singed a contract with Roadrunner Records. In March 1985 the band's official debut, The Day Of Wrath, was released. Produced by Algy Ward of Tank, the album was a musical phenomenon, easily joining black metal ideas with thrash substance. The song "Insurrection Of The Living Damned" had been included in the compilation by MFN called Speed Kills (next to bands such as Metallica, Slayer and Megadeth). Bulldozer practically from day to day became an icon on the thrash metal scene, with hordes of faithful fans awaiting with anticipation the follow-up record. In February 86 the band launched its second album, this time produced by the band – The Final Separation. Although today the group is rather disappointed with the song as well as the cover graphic, the album remains a strong and valuable add to Bulldozer's achievement list. After the release of this record AC had some problems with the Army Law, which eventually forced the band to take a two-year break. Then another change in the line-up occurred, with Don Andras being replaced by Rob 'K' Cabrini. By December 1987 the band managed to record their third album (composed during AC's troubled period) – IX. It was released through Italy's biggest independent record company – Metalmaster and soon created an international scandal thanks to its provocative and perverse content. Criticizing reviews followed from magazines such as Kerrang, Metal Forces and Metal Hammer. Nevertheless, the album proved to be a great success in Japan and Italy, where its real meaning was understood. With all their controversy, Bulldozer achieved a status of a living legend among thrash metal fanatics, and was mentioned next to top names on the scene at that time. The fourth and final studio LP by Bulldozer was released in October 1988. Produced by J.K. Birdsells, Neurodeliri presented a whole new quality in the band's style – new instruments, new ideas, new lyrics – this time without the ironical and provocative elements, but still strong and clear. The album was dedicated to Dario Carria, Bulldozer's first bass player, who committed suicide in 1988. After that the band released their last achievement, Alive… in Poland, which was a record of the performance given in 1989 in Zabrze, Poland, in front of 6,000 devoted fans. With the memorable live album came the end of Bulldozer's fascinating career. As Contini states, the group was terminated at the right time, with all the band members stepping down from the scene as heroes in glory. This did not, however, dissolve the cult that formed around Bulldozer – to this day the group is considered one of the most influential thrash metal icons ever to emerge on the scene. AC Wild's perverse creation lives on in the music that shall never be forgotten..
PREVIOUS POST