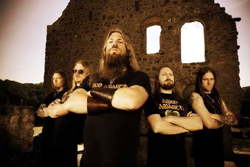 Last week Roskilde Festival announced one of the greatest acts in the metal genre at the moment. Of course, Slipknot will not deliver heaviness and aggression as the only ones this summer. The masked metal avengers are now joined by three just as heavy and uncompromising bands.

AMON AMARTH (S) play tremendous viking metal about Nordic mythology and brave warriors. Their powerful music never falls into sheer kitsch and tomfoolery. Expect lots of melody and great guitar licks from one of the most stable and respected names from the Scandinavian metal genre.

CANCER BATS (CAN) have created their own aggressive mix of Southern metal, punk rock and hardcore. Otherwise calm Canada now has a band that can wrestle with the heaviest boys from the American Southern States.

DARKANE (S) have their starting point in the same Swedish metal tradition that has given us At the Gates and In Flames. However, the lads from Helsingborg aim their heavy artillery more and more at thrash metal. Prepare yourself for high speed brutality and brilliant handling of the stringed instruments.

More music on the way…
Expect more announcements in the coming days. Roskilde Festival guarantees there will be lots of treats – also from the gentler music genres. Keep an eye on the website and your own inbox.