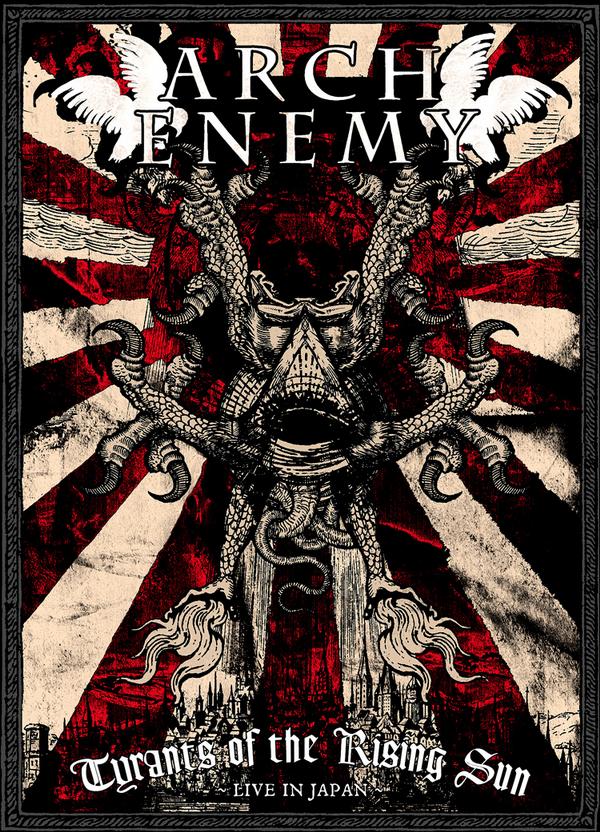 It's official now: Metal masters ARCH ENEMY will be releasing a brand new DVD / Live 2-CD entitled "Tyrants Of The Rising Sun – Live In Japan" on November 24th, 2008 in Europe and November 25th, 2008 in North America via Century Media Records. The DVD contains a stunning live-show filmed in Tokyo earlier this year, an in-depth 40 minutes road-movie feature, and all promo video clips so far shot for the band's latest album-masterpiece "Rise Of The Tyrant". Further details on the formats and packaging will be disclosed soon. In the meantime, here is the track-listing of the live show:

ARCH ENEMY – "Tyrants Of The Rising Sun – Live In Japan":

Michael Amott comments on the release as follows: "People are always asking us about Japan and the fans there… It is well known that Arch Enemy has been the most successful extreme metal band in the Japanese market for 10+ years, so we thought it'd be cool to show the Arch Enemy fans worldwide what it's like when we tour there, this is your backstage pass to Arch Enemy, Nippon style! A lot of people felt that we raised the bar significantly with the quality of the ‘Live Apocalypse' DVD – and I agree that was a great DVD, but I believe this monumental experience, that we are calling ‘Tyrants Of The Rising Sun" filmed totally in High Definition, – will leave you floored! With the metal world's #1 producer Andy Sneap mixing the audio and the brilliant Paul Smith editing and directing the visuals, the results are impressive! And Niklas Sundin of Cabin Fever Media bringing in some of the best artwork I've ever seen from him – we have a new DVD that we are very proud to present to our fans!"

Following up the release date of the live-album, ARCH ENEMY are now also proud to announce the final line-up for a string of European dates in December 2008:

ARCH ENEMY's vocalist Angela Gossow comments on the shows as follows: "This is a very diverse and exciting line-up we got together for these shows – A truly special run! Not only is this the first time in our history we tour with other female fronted bands, but we managed to cross over heavy metal, melodic metal, thrash/death metal and gothic metal in one billing. And Mercenary's power metal version of ‘Burning Angel' (you can find this on the new Century Media release ‘Covering 20 Years of Extremes) def. got stuck in my ears! Sister Sin is an upcoming, hard rocking act from Sweden… And Leaves Eyes will clearly be the ‘Beauty' whilst Arch Enemy proudly represents the ‘Beast'! Be there when the revolution begins!"

The band is also invited to participate in Doro's "25 Years in Rock" anniversary festival on December 13, 2008 in Düsseldorf (Germany). It will feature many other special guests such as and tickets can be bought at www.metaltix.de, more info can be obtained at www.doro-pesch.com / www.doro.de / www.doromusic.com.

And also don't forget to watch out for ARCH ENEMY's amazing cover-version of the DREAM EVIL classic ‘The Book Of Heavy Metal', posted today at www.myspace.com/centurymediaeurope!
The track comes off "Covering 20 Years Of Extremes", Century Media's special 20th anniversary compilation, which is available in stores now! It contains 32 mostly exclusive recordings where CM artists cover songs from other acts within the label's repertoire and the result is a fascinating journey through the label's impressive musical spectrum. Until the end of the year, Century Media will share some of these tracks with you in weekly turns at
www.myspace.com/centurymediaeurope
.