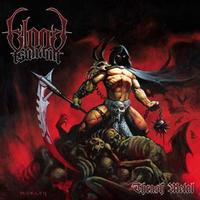 So…Friday night and what could be better than watching the Blood Tsunami guys partying with a gig at Maiden for their debut's release and us having a warming up for the night's beer drinking!??
Nothing…!
So…around 100 people took the trip to Maiden in order to see Bård, Pete and co., have a good time listening to thrash metal (which by the way is also the CD title) and wish the band in their own particular way "Good luck"!

Blood Tsunami is basically known to most of you. Having Bård Eithun Faust (also in Scum and ex-Emperor member) as a drummer, Pete (known from MTV's Headbanger's Ball), together with Dor on Lead guitars and Bosse on bass, they play a rather enjoying weird mixture of US thrash metal ala old Metallica and Slayer together with Swedish melodic death metal touches here and there.
I still remember the day I met Bård in one of the past's Inferno Festivals were he had given me a Blood Tsunami promo and after listening to that promo I wondered why the hell this band didn't have a record contract so far…so here we are now celebrating their first release.

The band got on stage under applause and the gig started with the song "Killing Spree" which in an unorthodox way is the last song of the album…hell yeah, why not? It is a quite fast song with nice catchy chorus and people seemed to like it quite a lot. The sound the band had was more than satisfying. All instruments had the ability to sound crystal clear and that was a big plus as Blood Tsunami's guitars have quite a lot of interesting guitar melodies that it would be a shame not to be listenable.
The band seemed to enjoy the whole thing quite a lot and they were quite imposing and convincing on stage. Second song was the "Devoured in Flames".

Pete was constantly calling the people to join in the whole thing and I think that he managed that quite well as the vibes managed to find a destination at least to the front row. The songs "Let Blood Rain" and "Rampage of Revenge" followed with the crowd getting a bit more enthusiastic having as a result a funny incident as one of the fans got on stage, slipped probably on beer and fell, Dor the lead guitarist didn't see him, having as a result him also to land on stage in a quite funny way…! The necessary embraces and laughs to each other followed something that showed the entire friendly and party atmosphere that existed at Maiden and the concert continued.
Next songs were "Infernal Final Carnage" with quite a lot of US influences when it comes to the riffs but i will make a special comm

ent for the song "God Beater" which is an instrumental song and my personal favourite from the "Thrash Metal" album. This song can easily get characterised as the "Call of Cthulu" or the "Orion" of Blood Tsunami. Beautiful guitar lines which vary during the whole 10 (!) minutes of its duration, give to the song sometimes a rather melancholic side, other times a feeling of anger and burst. Simply beautiful! Definitely a song that can make you to buy the album after listening to it.
The band also performed three more songs, "Torn Apart", "Evil Unleashed" and "Suicide". They kept headbanging and being quite energetic on stage during the whole of the live set, showing that they're not there just to kill time but to prove something.  "Evil Unleashed" is probably a hit for the band as fans go

t quite enthusiastic after the first notes. Despite all this heat (us, the band…everyone basically had red cheeks due to the heat) the band managed to make and perform a great live set for this occasion, all people were satisfied…and most of all happy for the band's new effort and start!

After the gig i managed to talk a bit with Bård and Pete and both of them seemed quite happy and satisfied as well…and that's what counts for a musician…getting satisfaction after years of hard work.

From my behalf…all the best Blood Tsunami, with many good and quality records! Cheers!

BOYS NIGHT OUT – Boys Night Out