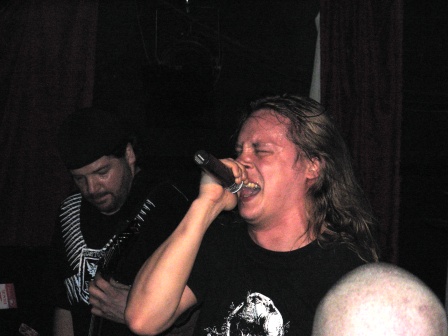 So after a rather tough day…and after grabbing a few beers, I walked down town to enjoy the night of the 16th as much as possible. Meaning plenty of alcohol consumption as even if it was a Wednesday night, Thursday the 17th would be a day off for all here in Norway due to national celebrations! My destination was the Garage venue as Dying Fetus would be there to spread their sick tunes to the Norwegian crowd.

When I got there Cattle Decapitation was on stage presenting their material. A four member act with quite young members, they delivered a quite enjoyable mixture of death metal and hard core (at least to my ears) material. The great disadvantage for them was the fact that the band was quite static; apart from the vocalist who did everything he could in order to awake the people in front of the stage. By throwing water on his head all the time for no apparent reason, spitting at the ceiling all the time (I guess most of his spits landed on his head afterwards…) and by making jokes in between the songs, he did, I assume, his best to keep the crowd interested. In some certain point he managed to accomplish his mission, the sound though was rather bad and occasionally the bassist had no sound at all.

After a quick smoking break, upstairs, Skinless were the next band on stage. This band REALLY impressed me! Skinless is a band from NY, with four albums so far, signed to Relapse Records and apparently their potentials are really high. With fast grinding parts, all time classic “Cannibal Corpse” riffs with low and high pitched vocals and also parts that brought in mind Incantation, Skinless managed to make the even bigger by then audience get a bit more enthusiastic. Jason Keyser (vocalist) probably was on speed or something, as he didn't even stop in between the songs, but walked the stage up and down. Really energetic and quite humoristic at times, he was constantly provoking the audience to mosh, do walls of death or even walls of death with "zombie walking" under sounds that were coming from the speakers that were reminding Michael Jackson's "Thriller" making people almost to piss themselves from laughing. The band was really good on stage having a rather good sound and a really great new, as far as I can understand, drummer named Chris Mahar. Skinless played a couple of songs from the album "Trample the weak, Hurdle the dead" plus titles like "Confines of Human Flesh", "Deathwork" and…."Tampon lollipops"(!!!). I am looking forward to hear from them again and I am sure that they did a really good impression to the Norwegian audience. Ah!!! Not to forget the amazing intermission were Joe Keyser (bass player) after requesting a lady to get on stage, (and after rejecting a guy who first got on stage…) wrestled the blonde girl named Katinka!!! In some sort of a WWF fight, with threats and swearing and other entertaining stuff, Joe managed to get his ass beaten by the great metal girl Katinka! I must indicate though his great move where he lifted Katinka in the air; being ready to smash her back…he failed in the end though….

Next in line the headline act, Dying Fetus being here to promote their latest album "War of Attrition"! I had great expectations concerning what I would see and hear from Dying Fetus and I wasn't disappointed in the end. The crowd filled half of Garage and Dying Fetus delivered unique moments of this fucked up death metal they are into. Quite simple on stage with a lot of headbanging, the band played songs from the old days ‘till present. The set list started with Grotesque/Homicidal and right after came Justifiable Homicide/Intentional Manslaughter. The band had problems with the drum kick sound in the beginning and John Gallagher was quite irritated by it. After having the right adjustments Raped on the Altar came to our ears. Far better sound and really nice vocal adjustments from both John Gallagher and Sean Beasley….and then the show started. Exactly what I was waiting for! Bass guitar tapping, weird drum tempo changes, and guitar riffs during the whole set list with songs like We are your Enemy, Schematics, Nocturnal Crucifixion, and Permanently Disfigured, Dying Fetus showed us how extreme music and technique skills can combine. The band performed for more than an hour and they seemed to be enjoying the gig and so did the crowd. It was a good death metal night, everyone by then had drunk quite a lot and more beer was about to come…Cheers!