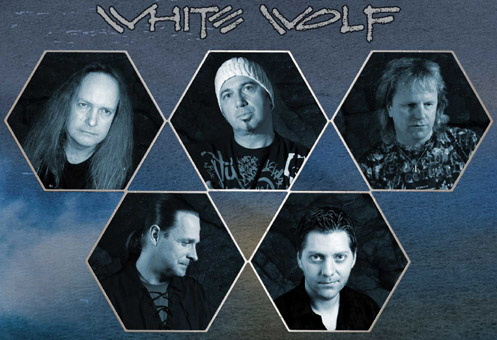 White Wolf – "Victim of the Spotlight"

Escape Music (Zink Music/Bonnier Amigo) are pleased to announce the release date for the new anticipated album from White Wolf, release date is set for the 23rd of July.

Possibly one of the most talented, yet underrated metal acts to come out of Canada in the 1980's had to be the band White Wolf. They were formed in 1980, and were very popular as a cover band, but they also wrote their own material which was warmly received by the audience. When they originally shopped their demo material they had many record company offers, including Heavy Metal records and Music for Nations. The band eventually decided to go with the rapidly expanding RCA group and in 1984 signed with them for the first White Wolf release "Standing Alone". A good deal of exposure followed and White Wolf toured the States and Eastern Canada extensively. Their popularity spread in to Japan and Europe, which ended in a quarter of a million copies of the album being sold worldwide.

Two years later in 1986 the album "Endangered Species" was released and this was a very worthy follow up to the "Standing Alone" album. The album had an aura of such bands as Y & T and Triumph, but also British bands like Judas Priest and Magnum. Oddly enough the album had a cover of Magnum's own "Just Like and Arrow"! However, for various reasons the band split up in 1987, a sad day for the band and fans alike. Even at the time there was thoughts of recording a third album…who would have thought it would not be until 20 years later!!

Later Don Wolf was to front the band Point of Power in 1992, record a solo album (Making Changes) and later form Project X with Kenny Kaos in order to release the album "Blueprint For Xcess" on the Escape Music label in the late 90's (catalogue number ESM006). This was one of Escape's earliest releases and is still highly regarded to this day!

Moving back to the present day and White Wolf, it was Escape's own Khalil Turk that suggested to Don a new album would be a great idea. A phone call to Cam Macleod and the thoughts the band had 20 years ago had been magically resurrected. Here we are in 2007 and the White Wolf is to prowl the streets once more! The new album "Victim Of The Spotlight" is soon to be released and the sound these guys have created is even better than before; this is very catchy metal and is bound to rekindle the flame for fans old and new.

Escape Music is also delighted to announce the re-release of both White Wolf albums, "Endangered Species" and "Standing Alone" as a double CD digipack. It is beautifully put together with new liner notes, loads of pictures, re-mastered and with two bonus tracks and three video tracks – more info later…

Please feel free to listen to the opening song at this link: Eyes Of The World