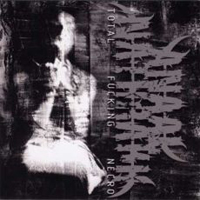 ET – Hello. At first, can you tell our readers a little about Anaal Nathrakh's style of necro metal?
V.I.T.R.I.O.L. – Yes, it's fucking horrible. A kind of violent style of Black Metal that sounds new rather than old, but still has the necrotic spirit. For anyone who hasn't heard us before, fucking savage is about the best way to describe it.

ET – You just released an EP entitled "When Fire Rains Down From The Sky". What can you tell us about that one?
V.I.T.R.I.O.L. – It's fucking savage! We are very pleased with it. It's brutal, but it stays interesting. It's got a lot of stuff in there that might not be obvious the first time you hear it, but it's still immediately satisfying if you want the musical equivalent of a line of bad coke. We're pleased with how violent the feeling of the CD as a whole is, and it was of course great to involve with Attila and Seth.

ET – What's the biggeste difference between the EP and The Codex Necro CD?
V.I.T.R.I.O.L. – For anyone who's heard our first album, the EP is basically a refined version of similar themes. Not changed in any way that takes away from the style of the album, but different enough to still sound fresh. Some people have said things about it being produced differently or whatever, but it isn't really all that different. The writing is better, and it kicks your head in, while still being catchy in a fucked up kind of way.

ET – Both your demo's Anaal Nathrakh and Total Fucking Necro was re-released again as a CD last year, this time on Rage Of Achilles. Tell us a little why it's been released on yet another label?
V.I.T.R.I.O.L. – Well, it was simply because people asked for it. The demos were originally available through Leviaphonic on CD-R and appeared mostly in pretty underground places. But then Leviaphonic died. Although there were a fair number of people who had the demos, there were always people having heard of us through the underground or who had heard our first album wanting copies. So when Rage of Achilles said something about wanting to release something by Anaal Nathrakh, I thought it would be a good opportunity to make the demos available to anyone who wanted to hear them.

ET – All your releases are very hard to find outside the UK. Why? (is my short question here�hehe)
V.I.T.R.I.O.L. – I don't fucking know. It pisses me off. We are not the kind of band who are interested in trying to get rich from our music, and the style of music we play would always be too extreme to ever make millions. But what we do want is for people who want to hear our music to be able to go to their local record store and buy the CD. Is that too much to fucking ask?

ET – Mordgrimm seems like a very underground label�..very hard to get e-mail answers etc etc. What's your opinion on the way Mordgrimm is working and will you stay with them in the future?
V.I.T.R.I.O.L. – We have finished our contract with Mordgrimm now, and don't intend to work with them in the future. Things have gone well in the UK, our CDs have been reasonably easy for people to get hold of if they want to hear them. Plus we've got very good reviews in magazines etc. But I am totally and utterly fucking fed up of people from outside the UK saying things like your last question. 'I can't get your CD in xxx country, where can I buy it from?' or 'Our shop has customers trying to order your CD but we can't find any copies to sell to them here in xxx country! Your record company hasn't answered our emails!' And so on and so on. One the jobs of a record company is to make CDs available to people who want them, and outside the UK it seems Mordgrimm have failed to do that. It is a shame. For a while they started communicating with us again, but they have now seemingly stopped. We get a statement every so often saying how many copies have been sold etc, but pretty much nothing else. For our next deal, good distribution is very important to us.

ET – Anaal Nathrakh has a very old school necro sound. What would you say is your influences?
V.I.T.R.I.O.L. – I think we've managed to get the spirit of old necro black metal and force it into a slightly more modern kind of music. Which sounds like a load of shit. Whenever bands say stuff like that I normally just think they're terrible. But the amount of times we've been compared to old Mayhem and so on, it must be true. Our influences musically are stuff like old Darkthrone, De Mysteriis, stuff like that. There's nothing on any Darkthrone album with the intensity of blastbeats that some of our songs have, for example. But the old school necro sound is still there somewhere. The fact that we are great fans of De Mysteriis Dom Sathanas was one reason we were so happy to get Attila to do some guest vocals on our new CD. There are a lot of other influences, but we don't talk about them.

ET – What's the next big happening for Anaal Nathrakh?
V.I.T.R.I.O.L. – We are working out our next recording contract at the moment, then in the next few months we will start work on our next album. It is difficult to describe what total fucking armageddon it will be! We have already started the concepts for the CD and the filthyness of the utter lumps of vile shit that we will produce will hopefully make people sick. There is also one thing already recorded that will appear in some form. We will only ever get worse and fucking worse, more fucked up with each CD. Absolute fucking violence!!!

ET – Do you listen to norwegian black metal and what's your opinion on the use of more synth and the mixture of styles that's seem to be the thing in that scene right now?
V.I.T.R.I.O.L. – A fair amount of Norwegian Black Metal is great. Generally speaking the best Black Metal has always come from Norway, of course. It has done ever since A Blaze in the Northern Sky was released, that was the first thing I heard that was what people today would call Black Metal. Synth stuff? Fucking rubbish. Synths can be used to make some truly fucking fantastic sounds. They can also be used to make a band sound completely fucking crap. And it's almost always the second of those things that happens. Black Metal should sound fucking horrible and send wimpcore posers running away with shit streaming from their gaping assholes. Maybe of you do it just right, a synth can help that. Make something really disturbing sounding. But how are you going to do that singing about fucking romantic vampires and making noises that sound like flutes?

ET – What about your other bands, Frog and Mistress? Same style as Anaal Nathrakh?
V.I.T.R.I.O.L. – No, not at all. Irrumator has Frost, which sounds essentially like classic era Mayhem, but apart from that, the others are a bit different. Frog has been taking a rest for a while, but hopefully it will be back soon. Polyrhythm, staccato stuff. We are both in Mistress, that has a certain degree of necrotic spirit about it, but is more about alcoholic depression, being heavy as fuck and some blastbeats. Eyehategod mixed with Extreme Noise Terror or something like that. Violent, but in a different way to A. N. Plus I do Benediction. I joined them after their last singer left, so it's not quite exactly the music I would make myself, but they are fucking great guys and it's lead to some incredible gigs. And then there's all the other various shit we do.

ET – Which of those 3 bands is your main priority?
V.I.T.R.I.O.L. – They are all totally separate. It might sound strange, but we both think totally differently depending on which band we're working with at the time. So they're all the top priority at the time we're doing them. I think maybe a lot of people who have more than one band lose focus and dilute what they're doing, but we keep everything totally separate and commit 100 per cent to each one as we do it, and that works for me at least. It's like different moods. A person might be reasonably friendly if you talk to them on one occasion, but don't think for a second they won't hunt you down and murder you in your sleep if necessary. Most people are like that I think.

ET – Anaal Nathrakh is you and Irrumator right? Have you ever performed live or is this a will-never-happen thing..heheheh?
V.I.T.R.I.O.L. – It's more that it's unlikely to happen. We never have done a gig as Anaal Nathrakh, and we have no plans to. But we won't say in concrete that it could never happen. It would be a good thing to do, but it would have to be done right, and that's not something that we have plans to do at the moment. You never know…

ET – Here your chance to say whatever you like about whoever you like or whatever�.
V.I.T.R.I.O.L. – If I said whatever I liked I'd probably end up getting death threats so I'll keep it simple. Thanks for the support.
Stay fucking necro!