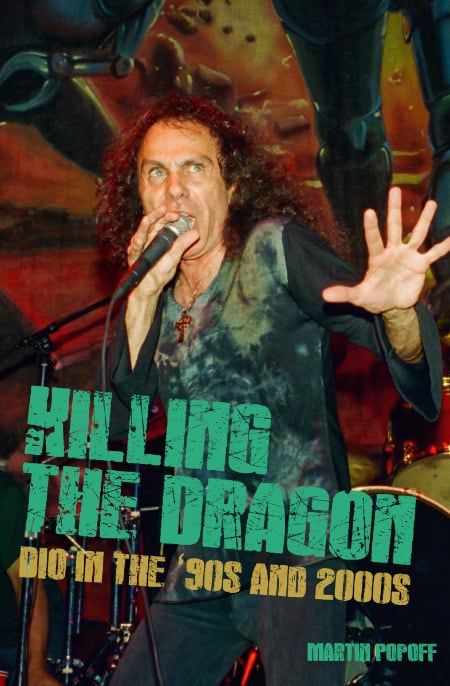 Renowned author and music critic Martin Popoff never fails to impress and inspire me thanks to the quality and depth of his written works. Killing the Dragon: Dio in the ’90s and 2000s is no exception to that rule. This one is actually the kind of book that I had been dreaming of and hoping for, and by that, I mean that I have been a huge fan of Ronnie James Dio’s outputs from those two decades for many years, and it is wonderful that there is finally a proper analysis and examination of the songs, albums, and tours from those eras available now. Strong and muscular works of heavy metal brilliance such as the doom-laden Strange Highways, the refreshing and dynamic Killing the Dragon, and the majestic Magica (just to list a few) deserve a study and in-depth discussion of their own, and Popoff expertly guides us through the writing and recording sessions, the changes in personnel, the creative peaks and valleys, and the dark horses and gems that those overlooked albums from 1990’s Lock up the Wolves to Master of the Moon from 2004 contain. Practically every member of the legendary outfit have been interviewed, which lends weight, substance, and some rather interesting perspectives to the narrative.

Luckily, Killing the Dragon (the book, not the album) also devotes a chapter to the marvelous Holy Diver Live epic, which yours truly witnessed in London back in October 2005 (and which was subsequently released in 2006). The criminally underrated Inferno: Last in Live from 1998 featuring Tracy G on guitar is also given sufficient space within the book, which makes for a fascinating read, and one can only hope that this perfectly structured, concise, and clearly written piece on those stately albums from Dio’s twilight years will turn more people on to them or at least revisit them, especially the aforementioned live LPs. As is usually the case when immersing myself in works by Popoff, I find myself disagreeing with him on quite a few things as well as agreeing with him on several others, which makes for an incredibly entertaining and lively reading experience in the sense that it feels as if one is engaging in a dialogue and discussion with Martin. Truth be told, I really dig that process.

Informative and illuminating, Killing the Dragon comes highly recommended to fans of Ronnie and the Dio band, and the brilliant thing about it is that it covers the aftermath and legacy of the group too, which is to say that Last in Line, Dio Disciples, the Dio hologram tour, and all the posthumous releases are also namechecked and discussed briefly. Heaven and Hell (i.e., Black Sabbath) and WWIII also appear in the text. Now, if you will excuse me, Popoff pointed out some interesting things regarding the much-maligned Angry Machines (1996) that make me want to give that one a serious listen again right this very minute.

FALL OF SERAPHS – From Dust To Creation