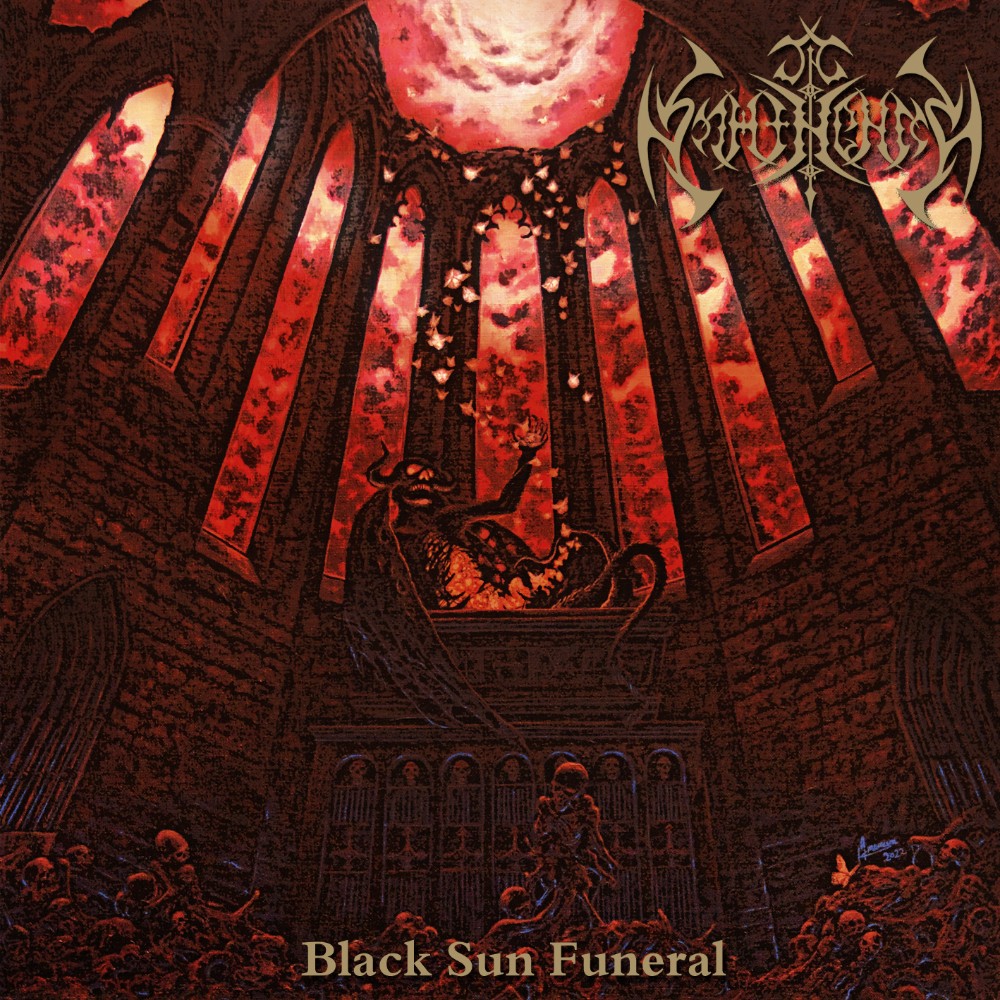 “If anyone wants to come after me, he must deny himself and must take up his cross and then follow me” (Matthew 16:24, REV)

Do you miss the classic melodic death metal of In Flames, Dark Tranquillity, At The Gates or Edge Of Sanity? Then look no further but to the debut of the Japanese one man act Into Nothingness’ “Black Sun Funeral” for your fix. You know the deal: razor sharp yet rusty riffs, multiple melodies per track, frequent acoustic breaks, intros or ouros, savage growls, cavernous yet clear production are some of the components of a classic melodeath album. Sometimes you get great songs with the package sometimes you don’t and, in the case “Black Sun Funeral” you definitely do even with the typical trappings of the debuts.

If we ask ourselves: whence cometh this nothingness, we get an easy answer: from the Lord Nothingness himself, that is, a Japanese multinstrumentalist and growler, Kenta Inoue, who alone handles vocals, guitars, bass, programming as well as the production. This one man DIY approach would cause many to collapse under the weight but Inoue seems born for this, specifically from 2014 when In Nothingness was “Eternal Nothingness” for 2 years. In fact, the creation of what would eventually become Into Nothingness apparently inspired him to form several other one man death metal projects such as Ancient Cosmos, Cursedness, Daemonian, Evil Beast, Holiest Era, Morbid Art and Sawmaster with Inoue under various aliases, always the sole creator. He didn’t bother with needless releases before this here debut but for one, the eponymous²⁰¹⁷ EP released on Invasion Of Solitude Records.

The 8 track album, 7 songs + one short instrumental (The Last Autumn), which, I’ll say it right here makes zero sense as such rather than as a part of the closing title track, is not too a varied affair in the sense that all songs do feel like cut from the same cloth, something that contributes to the score, but they are almost all filled to the brim with twists and turns and multiple melodies to such an robust extent that it can be largely forgiven. My favorite may be the title track with its vicious inherent deathliness and pitiless aggresion while not bereft of catchy melodies (Inoue often playing a dual guitar attack with himself, forgive the clumsy choice of words) but, with respect to the melodeath Gothenburg nostalgia, “Sadness Is My Cross” is a very close second favorite and the first track that got stuck in my head and to which track I now brefly turn.

As no lyrics are available anywhere and the death metal growls are rarely decipherable unless you’re Chuck Schuldiner (Death), David Vincent (ex-Morbid Angel) or Ross Dolan (Immolation), I have to take an educated guess that Inoue alludes to Jesus Christ’s words in Matthew 16:24 as pertaining to the sadness being given to him as a cross to bear whether or not he’d choose even to pick it up, but that shows how people, no doubt inspired by religious tradition, twist the Scripture to make it say something it doesn’t. Jesus’ words are clear: you have a real choice to pick up your cross and bear it just as much as Christ himself did. It is not a scheme nor is it a ruse, nor was Christ disingenuous when he said that, therefore the cross cannot and never is just thrown on the back of an unwilling follower like in some Sofoclesian tragedy. It is up to you and you alone if you choose to bear it. As no one chooses to be sad but rather sadness, as any other emotions, comes and goes it can feel like an appointed cross but it isn’t. Having said that, it’s also possible but less likely, that Kenta understands the idiom of bearing one’s cross correctly and he conveys that he has freely chosen sadness as his cross, or, least likely of all, that he’s purposely ambiguous about the issue. Again, as we cannot know for sure we can make an educated guess based on other titles such as “The Garden Of Pain”, “Shadow Of Grief” or the “The Moon That Never Rises Again” that he most likely sees himself a victim of inescapable fate like Oedipus or Jocasta.

Speaking of “Shadow Of Grief”, it’s another standout, a blastbeaten blackened melodeath anthem recalling In Flames’ “Whoracle” and not just for gorgeous acoustic parts and amazing leads and the same is true for “happily” melodic power metalling “A Nameless Grave” and it’s “Into Obscurity” that gets back to that raw brutality that culminates in the title track where such references as In Flames’ “The Jester Race”, Dark Tranquillity’s “The Gallery”, Opeth’s “Orchid” or even Shadow Falls’ debut “Somber Eyes To The Sky” ring a bell. And just because the opening “The Garden Of Pain” and “The Moon That Never Rises Again” seem less rich and intricate doesn’t mean they aren’t very good songs.

With his debut album Into Nothingness’ one man army Kenta “Lord Nothingness” Inoue proves that melodic (sometimes blackened) death metal is alive and well and that the same quality material can be released in the late 90s as well as in 2022, so if you’re a classic Gothenburg fiend you know what to do.