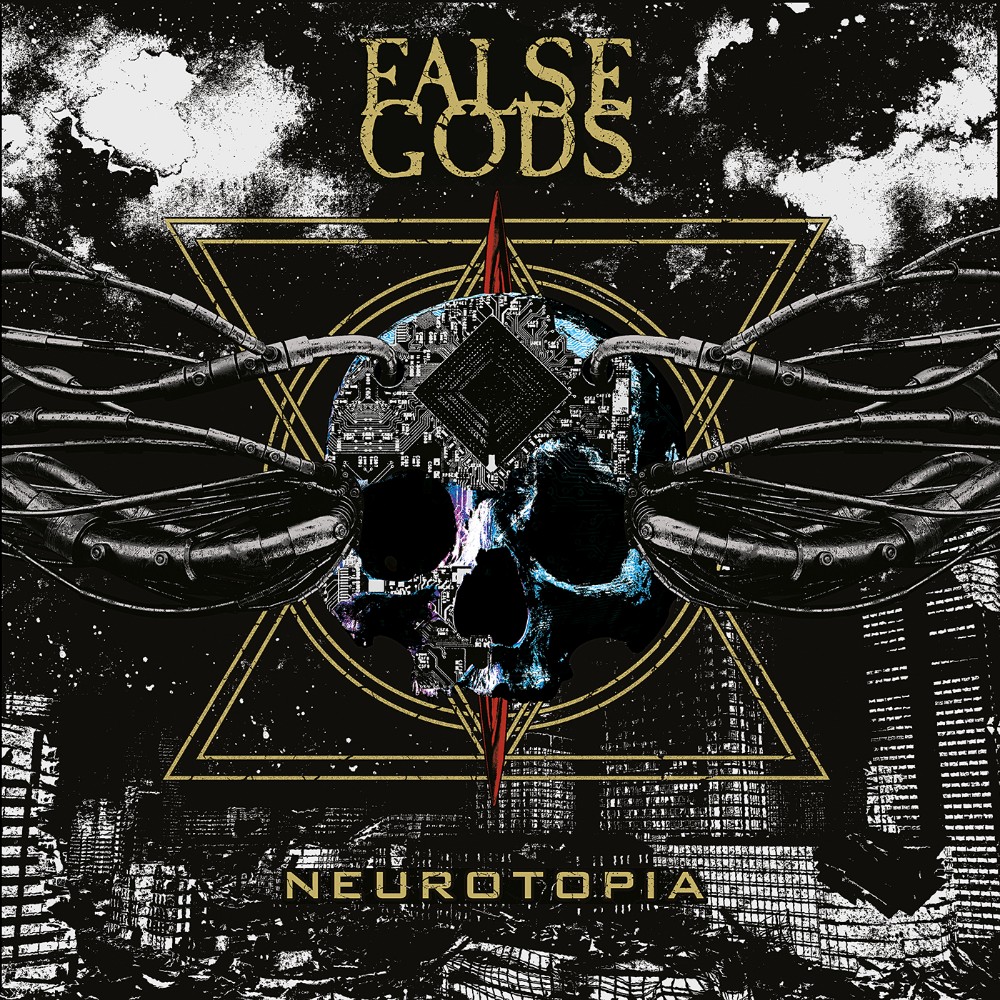 “Suffering is all that really ever was” (Your Thoughts Are Void*)

It’s been about 2 years since the post-hardcore/sludge+ metal New York quintet False Gods released their explosive fruit of the three preceding independently released EPs: “Wasteland” (2016), “Reports From Oblivion” (2017) and “The Serpent And The Ladder” (2019), the debut album “No Symmetry…Only Delusion”²⁰²⁰, reviewed here by me (5/6). Few bands can boast invention in the post-hardcore/sludge metal scene since, arguably, latter Prong and early Mastodon had sealed the deal long before it was even called a contest so chances are we’re dealing with more or less of a derivative. Having said that, False Gods (who remind me of the now defunct Dog Faced Gods not just in name) were clearly onto something new and fairly unique on their debut album and this is even more evident on, this here, “Neurotopia”, an album, I freely admit, I’m having a really hard time putting down long enough to write this review.

With a pretty consistent lineup, with the core trio: Burning Human vocalist Mike Stack (whose mournfully angry screams remind me of All That Remains’ Phil Labonte) , guitarist Greg March and drummer Paulie Stack (Mike’s brother?) intact, it’s much easier to lay foundations for your own style with just two albums even if the founding bassist Brian “Bro Town” Krasinkey gets exchanged for Mike Capobianco (2017) and the latter relieved by Johnny Geirak followed by Locus Mortis’ bassist Devin Stracuzza who came in after Locus Mortis drummer and guitarist, Nick Lousi (here just guitars). Whereas Colin James Marston (Defeated Sanity, Gorguts, Alphaville) produced and Alan Douches (All Shall Perish, Alkaloid, Hate Eternal) mastered “No Symmetry…Only Delusion”, the production I found no issues with whatsoever, what Anthony Lopardo and Raymond Marte did with “Neurotopia” deserves some kind of producer’s award because this record is freakin’ massive while clear as the Australian sky in the middle of summer.

I wrote in the review of the debut that False Gods were distinctly memorable and catchy, even hit-like while oppressively emotional beyond the call and this exaggeration is another aspect which made them attractive to these ears and all those traits are still here and much bigger. I also wrote that none of the tracks tried too hard to be progressive, and that is still true here because…they simply are mighty progressive. I’m just going to go ahead and say it: all the aspects of this album are highly reminiscent of masterpieces such as Biohazard’s “State Of The World Address” and “Mata Leão” (a lot), Machine Head’s “Burn My Eyes” and “The More Things Change”, Prong’s “Cleansing” or Mastodon’s “Leviathan” and “Blood Mountain” (a lot), which is to say that this stuff is absolutely revolutionary.

The musicianship is simply stupifying. I don’t know if it’s Greg March or Nick Lousi (or both!) whose guitar(s) sound(s) like resurrected Jimmi Hendrix but the solos in “Your Thoughts Are Void”*, “Belief Crimes” and the somewhat of a cover of Integrity In Contrast of Sin” (which they took from a pitiful bush to a baobab of a sequoia hight) all need to be Grammy nominated and I’m not sure which one should actually get the prize. I wrote in my review of the debut that it had a little fat to trim and a couple of substandard tracks, and, while the former is somewhat still true on this follow up (thus the score) the latter just no longer applies because “Neurotopia” is all killer no filler to the point that, while it’s not impossible, it’s quite difficult to pick favorites this time.

I mean, you can pick favorites when everything is generally in the same vein, although, compared with the excellence of the rest, “Phantasmawhoria” and “Belief Crimes” are just very good (but check out the gorgeous ambient/prog rock transition in the former and the brutal deathgrind onr in the latter). But then again, every track is really different. You like Biohazardian Crowbaric early Mastodonian thrashy hardcore punk that comes at you out of nowhere, in no small courtesy of the killer Stracuzza/Stack section, jumps you, robs you, beats the living daylights out of you, sets you on fire and gets away just before the cops arrive – “I, Cemetery”, “Phantasmawhoria” and “Belief Crimes” are for you. You want gorgeous The Cure, Prongy and Hansome (a forgotten 90’s Helmet’s Page Hamilton’s side project) melodies with lots of changing of pace, genres (including thrash, death, doom and grindcore, oh, heck, just count the tags under the review) and riffs – “Your Thoughts Are Void” and “Ghost Story” (with the puzzling 30 seconds of silence at the end) fit the bill nicely. You want both, while getting that early Machine Head vibe – the opener “Peloquin” and the aforementioned “In Contrast Of Sin” will make you feel like “Davidian” or “Struck A Nerve”. In addition to that names such as Type O’Negative, Black Sabbath, Life Of Agony, “Roots” Sepultura and Corrosion Of Conformity may ring a few bells here and there.

After several applications of “Neurotopia” and based on whatever lyrics I can decipher from Stack’s screams, I dub it 21st Century “State Of The World Address” or “Burn My Eyes” because, as with the Biohazard and Machine records in 1994, it seems to accurately describe the total dumpster fire this world is except it’s worse in 2022 then it was back in 1994, since you could awake from the nightmare (Each Day) in 1994 and in 2022 every day is a nightmare (Ghost Story) . For all the above reasons “Neurotopia” is my record of the year.

While False Gods’s debut is just very good and “Neurotopia” excellent, as I mentioned earlier, where “No Symmetry…” had some fat to trim so, too, “Neurotopia”, does have the tendency to go full on Grateful Dead in the forever jamming way, but, overall, is still clearly superior and the more you listen to it the more you discover and that is true of both records both of which I recommend with a shout out: ET and metalheads everywhere, trust me, we need to shout about these guys from the rooftops because they absolutely deserve it!