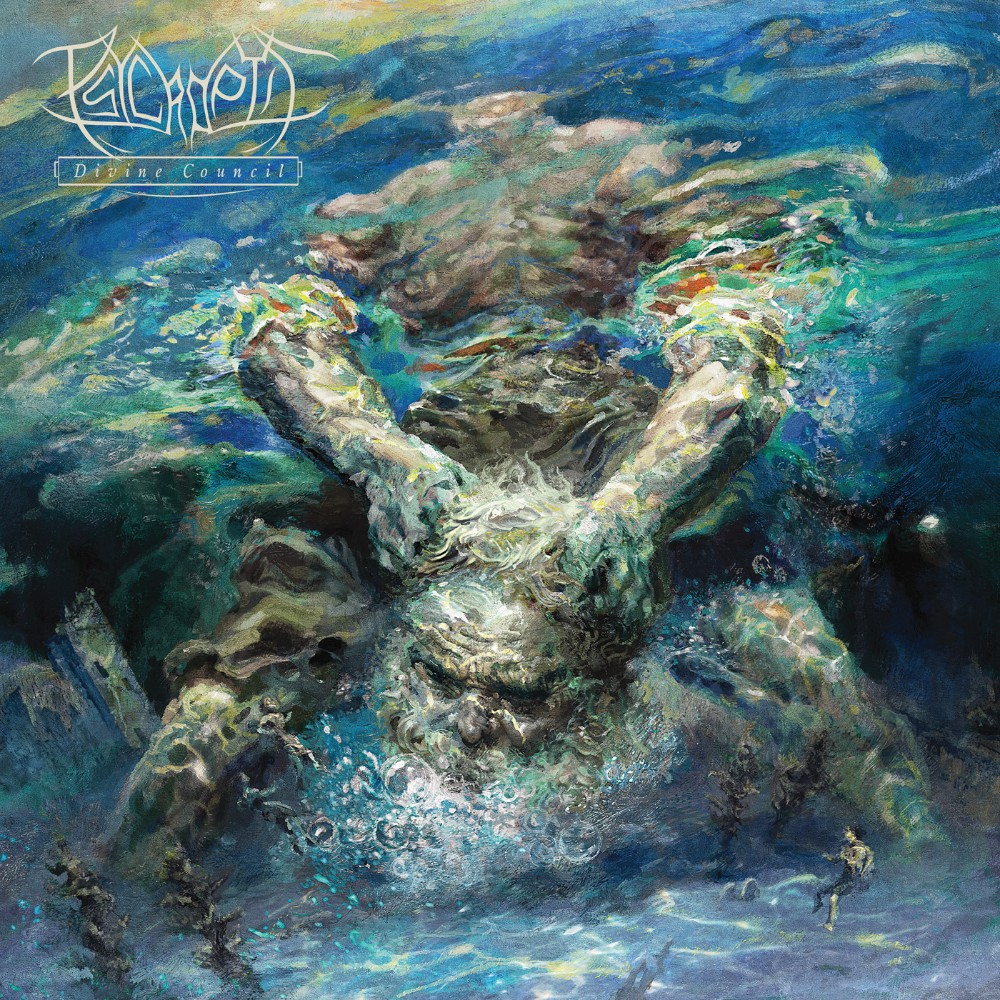 We’ve waited long enough for the Tasmanian, Australian technical death metallers Psycroptic’s 8th album since “The Watcher Of All”²⁰²⁰ two track EP meant as a bridge between “As the Kingdom Drowns”²⁰¹⁸ and this, here, “Divine Council” released a couple of months ago, an album initially planned for a 2021 release. Since we all know how much better 2021 was than its predecessor in terms of plans, venue availability and overall reliability, the delay is understandable, and, in the end, the product justifies the means including the delay. In other words, “Divine Council” was worth the wait but…

The aforementioned EP gave us a taste, the track “A Fragile Existence”, with dual vocals, hardcore screams and deathly growls, based around a supermelodic almost post-hardcore epic chorus where the screaming vocals got semi-clean bolstered by some deft choral arrangments which retained its inherent deathness and that in amidst high memorability. I wrote in my review that the chorus was so catchy you would find yourself eagerly await it despite the verse riffs general catchiness and that I was willing to bet this effect was intended by its creators, all of which stylistically recalled the mid era God Forbid. With the benefit of now having listened to the whole 9 track affair I can easily award “A Fragile Existence” the best and the most convincing track, not because the rest is substandard (it isn’t) but because it is the most concise and the most accurate representation of the whole album.

What sets Psycroptic apart from their peers is, as the band’s sole and founding guitarist Joseph Haley said, the act has always been about a well-composed, well-placed riff and in that respect the Aussies are similar to classic Slayer or Pantera, which had already been the case on my favorite “Ob(Servant)”²⁰⁰⁸ with occasional melodic Prongish leanings. As for the technical aspect, they are closer to Anata or (Dutch) Martyr in that the wizzardry is no excuse for lack of memorability but rather an occasion for memorability. The first two albums: “The Isle Of Disenchantment” (2001) and “The Sceptre Of The Ancients” (2003) were independently released by a consistent lineup of Matthew “Chalky” Chalk (vocals), Haley (guitars), Cameron Grant (bass) and Joe’s brother David Haley (drums) but Chalk left in 2005 ushering in the permanent vocalist Jason Peppiatt and the subsequent deal with Neurotic Records for “Symbols Of Failure”²⁰⁰⁶ and then Nuclear Blast for “Ob(Servant)” (my first exposure to the band) and “The Inherited Repression”²⁰¹², both excellent in my book. Subsequent the latter I lost track of them unaware of either the eponymous²⁰¹⁵ or “As The Kingdom Drowns”, already on Prosthetic Records. Although Psycroptic had lost a founding bassist Cameron Grant after the release it gained Todd Stern, known from his live performances in Cattle Decapitation and Havok, which may account for a strong thrash and traditional metal leanings which are expanded on “Divine Council”.

The aforementioned “A Fragile Existence” has one counterpart, the Emperoric “Enslavement” in terms of the overwhelming symphonic arrangments (more on that later) but another highlight, “A Fool’s Errand” is a third favorite, a death metal tune through and through with a huge cold melodic chorus reminiscent of Hate Eternal’s “Thorns Of Accasia”, Goreguts, Anata or could that be prime Immolation? Finally, the closing “Exitus” brings Revocation or Scar Symmetry (that last influence even truer on the virtuosic “Ashes Of Our Empire”) to mind for its progressive edge and guitar pyrotechnics, and, again, Haley is the man, handling all these nuances both rhythm and lead by himself.

Then there are those songs which are closer to thrash metal of Nevermore or groove akin to Lamb Of God. In the former aspect, the ominous and moody flamenco-driven “The Prophet’s Council”, is the best example while “A Fragile Existence”, the opener “Rend Asunder” and the choppy “This Shadowed World” examples of the latter but, if had to pick one influence which drives the cold melodicism that is at once pleasant yet feels like you’re being cut with surgical steel (Carcass reference unintended) it would be Ulcerate while, in terms of section, Fear Factory comes to mind, especially in the more operatic sung sections. Everything is executed here with a machine-like precision, indeed, not unlike what Fear Factory would sound like if they were more technical and skilled as Haley is.

So then, with all these accolades why only 5? After a few listens I find that, despite the aforementioned attempts at variety and genre melding, the material can get a little monotonous. This being a tech death record we can’t avoid what I call the oppression of monotony of “riff salad” technicality which can get to you. Just listen to the first 3 tracks and notice how you breathe a sigh of relief at something different with the opening chops of “Enslavement”. Then some motiffs almost repeat, such as the main chorus of “A Fool’s Errand” almost the same as in “Awakening” later on. I get that this is, after all, a death metal record and as such, it needs a unifying and a consistent sound. However, when you listen to Immolation’s “Majesty Of Decay”, Ulcerate’s “Schrines Of Paralysis” or even Morbid Angel’s “Covenant” you hear that balance of the same but different largely missing from “Divine Council”. It is that balance I was counting on when I first heard “A Fragile Existence”, that every track would be as unique as that yet from that, and I got it only with a handful of tracks (“Enslavement”, “Exitus”) and that is what I meant when I called “Enslavement” a counterpart to “A Fragile Existence”. This may seem like a small issue but it is exactly what made me give the last Suffocation “Of The Dark Light” such a low score (3.5/6) because it affected songwriting while with Psycroptic it doesn’t, which is why I only took one point away.

In spite of the aforementioned flaws I find “Divine Council” a worthy addition to Psycroptic’s discography. Haley is practically untouchable, and still a wonder to behold, an almost contradiction in terms when it comes to melodic tech deathrash guitarwork, Peppiatt seemingly bent on inventing new ways to scream, growl, and convincingly sing with a clever use of computer processing Devin Townsend would applaud, while still remaining himself, Stern/Haley section faithfully mimicking the riffs, which, again, recalls Fear Factory, with the production highly reminiscent of Anata’s “The Conductor’s Departure”.

If you liked these guys before nothing here will turn you off but I personally see tracks such as “Exitus” a doorway to even more depth and progression which I feel would help create that elusive aforementioned balance which is necessary for a death metal record and which death metal classics usually achieve.