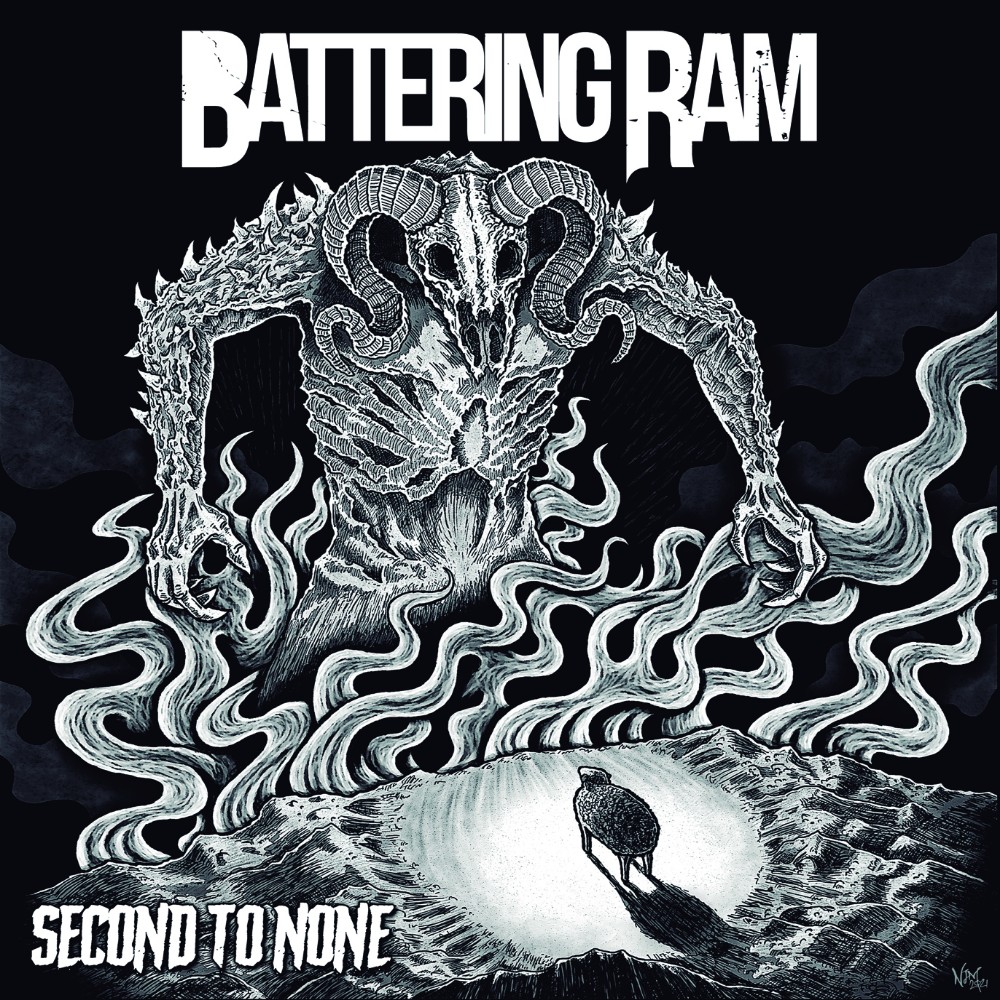 BATTERING RAM – Second To None

The Swedish hard rock and heavy metal quartet Battering Ram struck again a couple months ago with their sophomore release after the acclaimed eponymous²⁰²⁰ which I had reviewed here (4.5/6) having taken notice of the talent and potential while pointing out the usual trappings of the debuts: the inconsistent songwriting quality, too similar tracks and almost filler which detracted from the listening pleasure. Well, I’m happy to see a lot of improvement in all these areas.

Firstly, the unchanged line up of Johan Hallström (vocals), Jonas Edmark (guitar), Joakim “Jocke” Ståhl (bass) and Tony Trust (drums) allowed the band to develop and congeal as a lean, mean fighting machine which future live staples such as the 1,2 punch barnstormers “What I’ve Become” (verse riff similar to Asphyx’ “Molten Black Earth”) and “Too Late” give a loud and memorable testimony of, and if that isn’t enough, “Ram You Down” will do exactly to you what the title threatens. Right away, too, we see a great improvement in hooks and melodies that get stuck in your head. On that note the two perfections: “Hold On” and “Coming Home” will bring memories of Judas Priest and “British Steel” or “Screaming For Vengeance”, depending on which one is more familiar to you. These tracks may not be very long but you can hear how much work and creativity has gone into composing them by how addictive they are to the point that I have opened a folder named “Reviewing Pearls” on my phone and they are the first ones in it. Impressive, indeed, is the ability to write simple hooks such as the leading riff in “Pieces” which recalls Megadeth’s”Th1rt3en” album besides sounding like a classic rock lick or the progressive changes in the Alice In Chainsey “Battering Ram” where the main riff resembles Black Sabbath’s “Sabbath Bloody Sabbath”. The closer actually presents their ability to expand their horizons and I hope they will go more into that direction on album no. 3 because, by golly, there must be album no. 3 and rather sooner than later, and yes, I do mean next year.

Secondly, a separate paragraph should be dedicated to the individual performance, starting with the amazing guitar prowess of the single guitarist Jonas Edmark. The man’s vibrant “story-telling” solos are spectacular and different on every track but his command of the rhythm guitar as if he were one of the guitarist in addition to his soloing is just stupifying, at least to me. As touching the rhythm guitar, his style can be compared to Glen Tipton (Judas Priest), Angus Young (AC/DC) as well as Megadeth’s Dave Mustaine but the leads are somewhere between Adrian Smith, Dave Murray (Iron Maiden) or the Arch Enemy’s Amott brothers (Michael and Christopher) from “Burning Bridges”. That it works so well is in no small part due to the killer Ståhl/Trust section which is lockstep with him giving an impression as if Battering Ram have been playing and releasing albums for decades instead of a mere 5 years. All of the above makes Johan Hallström’s vocal job much easier but, of course, you hear, too, how hard the man works on his singing, something we, Americans, call “giving it all you’ve got” as opposed to just “doing your best”, which is particularly evident on “Ram You Down”, “Down” and the aforementioned country-flavored closer mission statement, where he gives his best performance to date somehow reminiscent of James Hetfield on Metallica’s “Load/ReLoad”, but some of those tracks remind me of the flaws.

As was the case with the debut, some tracks are just not as creative as the rest. Thanfully, none of them approach fillers this time and feature interesting melodies or riffs which make up for the nu-metal mediocrity such as “Down” chorus (easily the weakest track) or the verses to “Ram It Down” (a bit better but the chorus is too similar to “What I’ve Become”). Gentlemen, forget about run-of-the-mill cannon fodder like Five Finger Death Punch or Drowning Pool and focus on making each song as much of a standout as “Coming Home” (which something tells me is one of your favorite creations, what with that intro/outro chanted “O-oo-o-oo”) or “Hold On”. By all means, more Judas Priest and Alice In Chains. And, again, let’s go more progressive next time. I believe in this band.