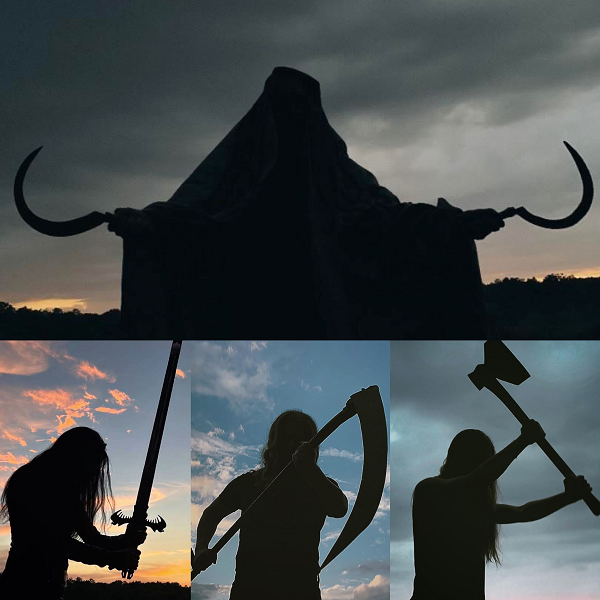 US Total Occultic Mechanical Blasphemers T.O.M.B, are back with their seventh full-length  album which is due to hit the streets on the 2nd December.  Titled “Terror Winds”, the album is a follow up to 2020’s “The Thin Veil”, which marked the beginning of the legendary band’s collaboration with Norway’s Dark Essence Records.

It is an album imbued with spellbinding symphonic ambience and necromantic noise soundscapes  that sees T.O.M.B return to their graveyard roots of old, raw Black Metal.  And today, Dark Essence Records have released the track “In The Ugly Dark”  from the album, which, according to the band serves as a very apt window into the heart of “Terror Winds” Itself, as they explain:

“In the Ugly Dark” serves as a introduction to the fierce song writing style representative throughout the new six song album. Its scorching guitar sound and barbaric drum beats coincide with the concept of a darkness unknown or experienced within the limitations of human existence.

It is an experience that will transport the listener back to the glory days of extreme dangerous black metal.

“In the Ugly Dark” can be downloaded or streamed from a number of services at https://link.darkessencerecords.no/TOMB_In_The_Ugly_Dark

“Terror Winds”  carries with it the authentically dangerous feel of early 90s Black Metal, combined with a powerful wave of ambient keyboards and classic T.O.M.B. noise.  Recorded live at the Ossuary Studios in New York City and mastered by Tore Stjerna at Necromorbus Studios in Sweden, and with artwork by Nestor Avalos, tracklisting for “Terror Winds” is as follows:

“Terror Winds” will be available in CD, LP and Digital formats, and is now available to pre-order from:

The history of T.O.M.B. spans over two decades,  since 1998, in fact, when, inspired by bands such as ABRUPTUM, HAVOHEJ, SAMAEL and SUNNO))), musicians No-One, B. Zimimay, Tyler B and Samantha Viola first got together to form the entity that would become T.O.M.B. Together they would astonish fans with a trademark sound that would prove to be be both horrific, and, at the same time, hypnotically spell-binding.

Dealing with esoteric matters  such as death, paranormal activity and occult practices, T.O.M.B. has used its twenty plus years of experience well,  with the band able to hone its ability to craft a sound that combines Black Metal with elements of  Dark Ambient, Doom, Death, Industrial and Power Electronics. The end result is a unique brand of terrifying black metal noise that has earned T.O.M.B. the reputation as one of the top innovators in the field of modern-day Black Metal.

More information about T.O.M.B can be found on the band’s Facebook page at https://www.facebook.com/totalocculticmechanicalblasphemy/

The official video for the track “Pestilence” from T.O.M.B’s 2020 album “The Thin Veil” can be seen below and at https://youtu.be/HIhfl_raDlE