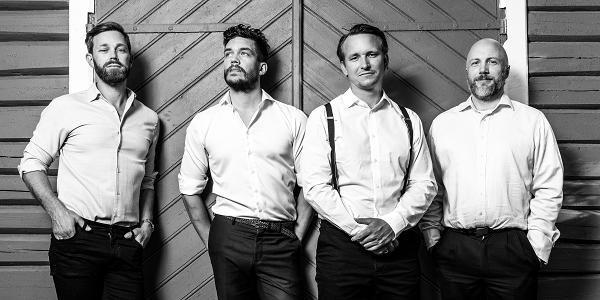 Karisma Records have released a second single from “The Quiet Rebellion of Compromise”, the upcoming third full-length album from Progressive Pop/Rockers OAK.

Titled  “Quiet Rebellion”, the single  can be downloaded or streamed from a number of services at
https://link.karismarecords.no/OAK_QuietRebellion

“The Quiet Rebellion of Compromise” is easily OAK’s  most dynamic album yet, and showcases the wide range of influences that have gone into developing the band’s sound.  With a sharper edge and some surprising  twists and turns, the album is still unmistakably OAK, with its members making ample use of their diverse backgrounds ranging from classical piano, to electronica, to prog and hard rock, thereby creating music that references both the  alternative scene as well as the progressive rock scene.

Recorded  in Ljugekroken and mixed at the Ghostward Studio by David Castillo (KATATONIA, LEPROUS OPETH, etc.) “The Quiet Rebellion of Compromise” was mastered by Tony Lindgren at the Fascination Street Studio.  Offering  subtle hints to both past and future songs in the OAK universe,  track listing is as follows:

“The Quiet Rebellion of Compromise” is set for release on the 11th November in CD, Digital and Limited Edition white vinyl formats, and is now available to pre-order from the following:

“The Quiet Rebellion of Compromise” is an extraordinary album  in respect of its subject matter, because, in it, the band explores the subject of mental health, concentrating particularly on the aspect of suicide. Having chosen to write about two highly important, but very controversial subjects, and cognisant of the fact that music as an art form is very open to interpretation, OAK did not want to treat the matter in the  “sensationalist” way it is so often tackled.  Rather, wanting to make sure  that the message came across clearly and respectfully, they sought advice from experienced scholars.

Even the cover design by Remi Juliebø / Deformat for “The Quiet Rebellion of Compromise” is a very poignant reference to the concept, in that it is based on the death mask of “L’Inconnue de la Seine”,  an unknown drowning victim from 1880s Paris (photographed by Anne-Marie Forker), whilst the font is partially based on handwriting from two real suicide notes.

Starting out as a folk-rock duo, OAK’s lineup has expanded to include Simen Valldal Johannessen on vocals, piano and keys, Øystein Sootholtet on bass, acoustic and electric guitars, Sigbjørn Reiakvam on drums, percussion, programming, keys and guitars, and Stephan Hvinden on lead, rhythm and slide guitars.

More information about OAK can be found on the band’s Facebook page at https://www.facebook.com/oakinoslo/