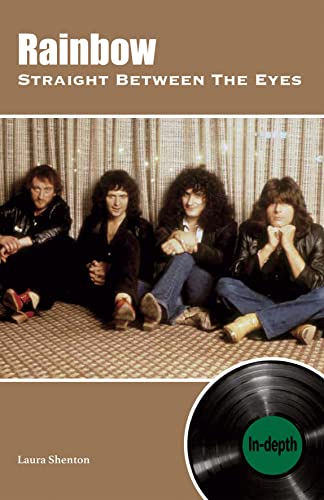 Author Laura Shenton has written an impressive number of books in a relatively short amount of time, and one of the reasons why they are so enjoyable to read (apart from being incredibly well-researched, that is) is that she narrows her focus quite considerably in her work and delves deep into the creation of one specific album, be it one by Jethro Tull, Deep Purple, Rainbow, or something else entirely.

Along with her informative book on Deep Purple’s overlooked Slaves and Masters LP, this latest one, which revolves around Rainbow’s Straight Between the Eyes album and era, is without doubt the most comprehensive, entertaining, and well-composed entry in the “Album In-depth”-series yet. Obviously, the fact that I am a ridiculously huge fan of said album and consider it one of the finest hard rock releases of the 80s might wield a certain influence on why I had such a fabulous time immersing myself in Shenton’s written piece on it, but nevertheless, her book answered a lot of my questions and left me with an even greater appreciation of the record, which is saying something. More than any of Laura’s previous works, Rainbow Straight Between the Eyes exudes determination, dedication, and a palpable sense of fondness for the subject matter, which makes for an enlightening and inspired reading experience. Her previous books occasionally felt a little too rigid and objective in their approach, but this neat and well-written little gem luckily feels more subjective and also livelier in terms of its tone and style of writing. Simply put, it is a little more vibrant and playful compared to its predecessors, if you will.

I am thrilled that there is finally a nicely composed book on the majestic albeit underrated Straight Between the Eyes out there now, and if you are a fan of Rainbow and the Joe Lynn Turner years in particular, you are bound to discover a wealth of funny anecdotes, interesting bits and pieces from various interviews, album- and tour reviews from 1982, thoughts on its legacy and status in a wider historical context, and how it seemed to bridge the gap between Difficult to Cure (1981) and Bent Out of Shape (1983).

If you cherish Rainbow’s stellar slice of heavy rock music from that glorious year of 1982, this book is for you.

RIPTIDE – Masters of the Apocalypse