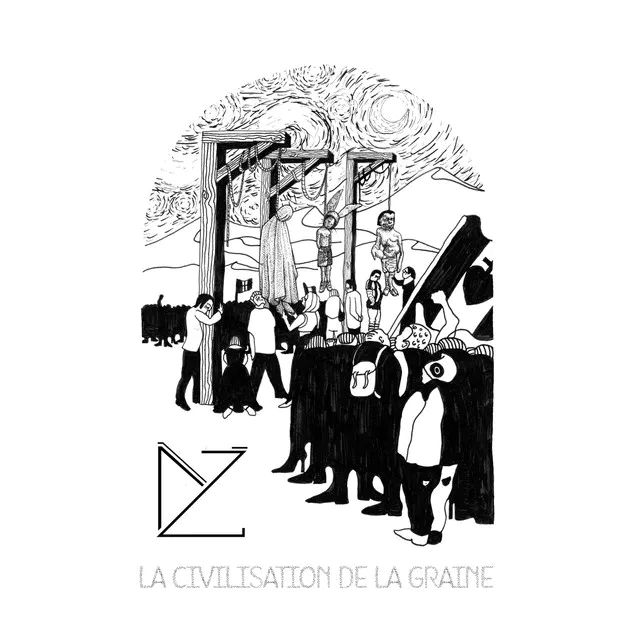 “La Civilisation de la graine” is the 3rd album of the M’Z project by Mathieu TORRES and is now released on all digital platforms: https://album.link/86vd3jdf9dxzg
The album is out via Luminol Records label, focused on progressive music.

M’Z is a project where one can find elements of a wide variety of styles: Canterbury, Progressive, Rock in opposition, Metal, Electronica, Space rock, Noise, Jazz, free-rock, Ambient, Psyche, Heavy, Punk, Drum’n bass…
The main idea of this project is to create parallels between poetic or philosophical concepts and music, without posing aesthetic barriers.

Born from the vital need to create, in 2018, M’Z has since released 3 albums, 1 EP and 1 single.
“Prisme” the first album, made the link between Colors, feelings and Music,
“L’autopsie du dogme” the second, attacked the music industry while working to analyze dogma in general and psychoanalyzing myself in the process,
“Cool is watching you” (EP) was interested in demolishing, in music and lyrics, the idea of the “Cool” posture which seems to be a norm in the age of social networks and the “start-upized” world.
“La Nef” (single) meanwhile, tried to extract a source, more or less healthy, of the need for human spirituality, when it is rid of religious doctrines

Finally “La civilisation de la graine”, the third album of the project, is a musical reflection on the essence of our patriarchal organizations and our tendency to organize ourselves into civilizations, certainly elegant but undeniably unfair, ephemeral, violent and wobbly. 8 pieces to try to analyze these phenomena.
Des Récits :
It is a criticism of the propaganda which is expressed almost permanently, in the civilizations which are created, to maintain an artificial feeling of coherence and common history.
Edifions des temples absurdes :
It is an amusement about the time, intelligence, skill, science and energy expended in constructing edifices to the glory of ever more unique and ever more masculine gods, concentrating the most power into a single entity.
Au confort de la mémoire qui sublime :
It’s an ode to nostalgia, the ability of the brain to transform a lived moment into a comfortable memory, regardless of the objective quality of the moment at the start. A weapon that wreaks havoc in the hands of manipulators of all kinds.
Assemblée Populaire :
It is first of all, an amusement on the difficulty of democratic expression and also a criticism of the shortcut proposed by our civilizations, which suggest that wisdom would be a masculine virtue, finally a criticism of the tendency to overexpression / overexposure masculine in assemblies, public spaces of all kinds.
La spiritualité Marketing :
It is a criticism of the recovery of the spiritual essence of the human being by the powers that be, to direct this energy for control purposes, towards official propaganda, the one that should be followed by all and all so that the collective narrative works.
Bureaucratie bémol :
It is a noisy piece, critical of the technocratic aspect taken by civilizations which tend almost systematically towards an overproduction of laws, decrees, various administrative documents, and this skilful way of transforming human subjects into files, easier to mistreat.
Enquête payenne :
It is a “balm” song, which aims to soothe the soul. A way to dialogue with the sapiens of all times, from the root and without filters, without the intermediary of learning or indoctrination (in its most extreme version) of the customs of the lands in which one resides.
Ishtar dance :
It is counter-propaganda, the expression of the violence generated by the systematic injustice of successive civilizations. It is criticism until rejection, the proposal of the extreme opposite of what we know today, as a response, an overload of the opposite balance. Fascinating, terrifying or seductive but just as unfair as the current dogma, always far from nuance but perhaps unfortunately necessary to find balance one day…
A few lines of thought to try to explain the intentions of this music, which, I hope, will better translate into notes the feelings described above.

The excellent visual is Stéphanie Artaud who designed it: alias “la griffarde” and who also does great tattoos, films, music… (among others).