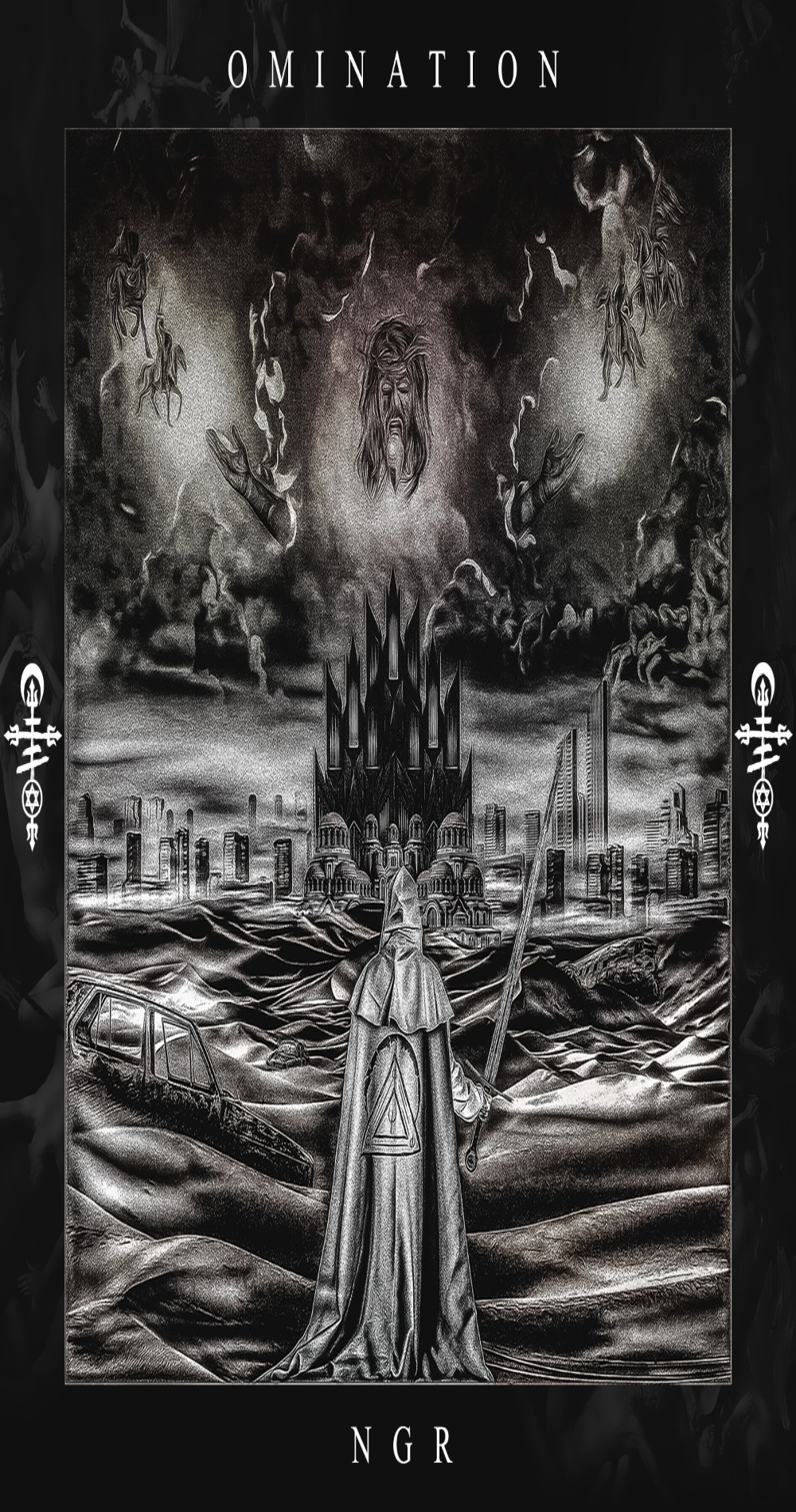 There are records which seem like towers of musings seemingly too complex to absorb whereby the reviewer is tempted to give up and move on to something else, but most of them simply prove that 1-2 applications are not enough to appreciate the more ambitious heavy metal records. Such is the 3rd installment, after “Followers Of The Apocalypse”²⁰¹⁸ and “The Whirlpool Of Ignorance”²⁰¹⁸, (yes, two records in one year!) since 2016 of the Tunisian funeral doom metal act Omination, “NGR” (short for “New Golgotha Repvbliq”). I don’t know if Fedor Souissi Kovalevsky (who added Zied Kochbati and Nassim Toumi to the lineup after the recording) is a Christian but all of his music is set to Biblical lyrics, which wouldn’t be so surprising or unique, given that Satanic bands such as Morbid Angel, Dimmu Borgir or Behemoth extensively quote the Bible with the music, but what distinguishes Omination is that Kovalevsky seems to be PRAYING to God on the records with his lyrics often comprised of entire Bible quotations, as is often the case with Christian metal artists. If Kovalevsky IS a Christian then being such an one in a 99.4% Muslim country makes him all the more interesting. In any case, he is truly a one man army having handled all the music, the drop dead marvelous production and arrangments, all the instruments including full church organ and all the growly, shouting and clean vocals on this near masterpiece of a record. In fact, I might even call “NGR” A masterpiece despite its flaws for both the music and vocals are superb.

If there was ever a proper soundtrack to the Book Of Revelation known as The Apocalypse (from Greek: apucalypto) “NGR” is it. Interestingly, the overwhelming feeling you get of grandiosity and pompousness quickly disappears already with the second application as you begin to enjoy the riffs and the absolutely stunning melodies reminiscent of Anathema’s “Serenades/The Silent Enigma”, My Dying Bride’s “As The Flower Withers/Turn Loose The Swans” and Paradise Losts’ “Gothic/Shades Of God”, that is, the renowned Peaceville Trinity, the best death doom ever on offer to these ears. You can hear everything that made the aforementioned 6 records the delight to the senses on “Apocalyptic Ignis Fatuus”, “Necropolis, The Backbone” or the favorite “The Sword That Came Out Of His Mouth”, with the vocals now growly to the point of Oblituary’s John Tardy on “Cause Of Death” now fantastic shouts a’la Ministry’s Al Jorgensen or Gojira’s Joe Duplantier but that’s still not all there is to this record. In “Death(s), Love, and Life” the repetitive sequence recalls the ending of Pink Floyd’s “The Darkside Of The Moon”, in “Unto The Ages Of Ages” I clearly hear early Swallow The Sun and Opeth with classic Machine Heady riffing, while the closing title track may be a whopping 20 minutes long but it is packed with so many twists and turns, ebbs and flows, including a near black metal blast, changes of pace and various growling and clean vocalizations including verbatim “Lord’s Prayer” in Tunisian language which is similar enough to Polish for me to easily unmistakably identify as either Matthew 6:9-13 or Luke 11:2-4, and I haven’t even covered half of what this record has on offer to a demanding but a discerning and patient listener.

As I mentioned earlier, for all its superlatives and sheer compositional brilliance “NGR” has minor flaws, the fantastic and huge production not one of them, namely three tracks of noticeably lower complexity. Now, I wouldn’t be surprised if the intention was to place these tracks strategically to offset the behemoths but the opening intro “Crossing The Burned Wasteland” could, as almost always in such cases, be effectively incorporated with the following track, here “Apocalyptic”, even with the then 13 minute running time, the relatively short Officium Tristean dirge “Last Trisagion” could have been more varied as could the second shortest track, almost funeral doomish “Post-Apocalypticism”. But all these are gripes of an otherwise very satisfied consumer.

Frankly, I cannot recommend “NGR” enough to anyone who likes any kind of heavy rock or metal, one of the finest recordings of last year which had not made it to my top ten simply because I just recently got around to listening and reviewing it. Very very highly recommended.