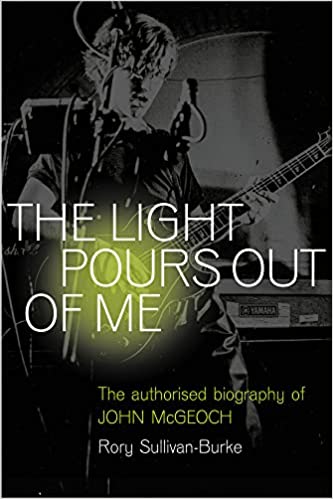 RRORY SULLIVAN-BURKE – The Light Pours Out of Me: The Authorised Biography of John McGeoch

The story of John McGeoch is an engrossing one and let me start out by telling you that I am thrilled that there is finally a remarkably candid and deftly executed biography on the late guitarist and songwriter out there now. Known for his stellar work with Magazine, Siouxsie and the Banshees, The Armoury Show, and Public Image Ltd., this man literally influenced the minds of a generation of musicians.

The author expertly guides us through McGeoch’s childhood years and paints an exciting picture of the time when the Scottish-born guitarist moved into a flat in Manchester in his late teens, struck up a friendship with his flat mate Malcolm Garrett (who would go on to design album sleeves for Buzzcocks and Duran Duran among others), and began studying fine art. McGeoch possessed a strong work ethic and excelled at the many creative endeavors he pursued in his youth, he made friends quite easily and was known for his enthusiasm, generosity, and dedication to whatever he applied himself to – one of those being how punk rock could be taken further and how he could help transform it into something that went beyond the confines and conventions of the genre.

“The Light Pours Out of Me” offers a unique perspective on who John was a man, a husband, a father, a friend, and a musician, and its greatest strength is its singular vision and ability to paint such a vivid portrait of a somewhat complex human being. Friends, family, band mates, and industry people all lend their voice to the narrative and help bring out the many nuances of who McGeoch was and how his relentless striving for artistic individuality inspired those around him. The chapters chronicling his upbringing in the working-class environs of Greenock are evocative and the ones detailing his highs and lows with Public Image Limited are a compelling read and worth the price of the book alone. Sullivan-Burke’s passion for the albums and records that McGeoch appeared on as well as his admiration for the skilled artist courses through each page and is prominent throughout, which entails that it reads and feels like a genuinely captivating story with a keen eye for detail where nothing is overlooked or glossed over including John’s battles with alcoholism and addiction.

The charismatic John McGeoch is undoubtedly an overlooked genius and a musical pioneer, and not merely with respect to the post-punk movement, mind you. His work stands tall and proud as some of the most inventive and truly original material to have seen the light of day these past many decades, and the list of high-profile names that he has influenced is an impressive one. I am forever grateful to Rory Sullivan-Burke for having written this beautiful literary piece on one of the most gifted artists to have walked among us mere mortals. A moving account of a brilliant man and a much-recommended study that is worth your time.

JOE SATRIANI – The Elephants of Mars