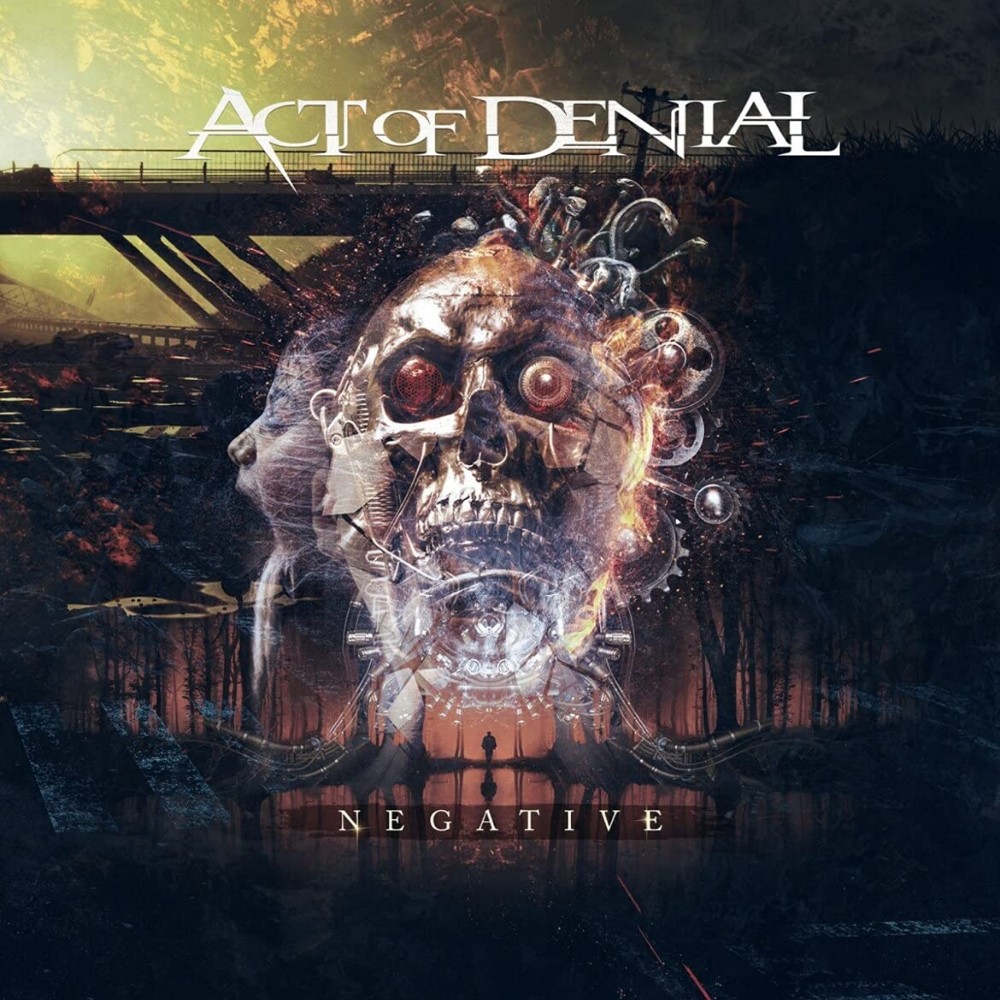 With files sent by dropbox or google drive one usually doesn’t get to see the lineup, the bio and the like so when I first heard the debut album from the melodic death groove metal part Croatian ensemble Act Of Denial I thought “man, that dude sounds like Björn “Speed” Strid of the Soilwork fame! It turns out that he does for a good reason: it IS Björn Ove Ingemar “Speed” Strid and doing a fantastic job! Moreover, the fretless bass on “Negative” is handled by none other but Steven Di Giorgio known from Death or Testament, to name just two bullets on his resume. Then, the rest of the section is Septicflesh drummer Kerim “Krimh” Lechner while the fabulous keyboard atmospherics and melodies are served by Strid’s bandmate from Nightflight Orchestra John Fredrik Lönnmyr, so, essentially, Act Of Denial is a supergroup. But wait, because the two Croatian guitarists, Nikola “Luger” Bartulić (rhythm guitars) and Vojan “Voi Cox” Koceić (lead guitars, programming) are both as relatively unknown and excellent as bassist Kelly Conlon and guitarist Bobby Koelble were on Death’s magnum opus “Symbolic”. The musicianship is simply top notch, which may sometimes result in an overkill, but, in this case, resulted in a near masterpiece as “Negative” is all killer no filler despite three of the ten tracks being MERELY very good.

The music on “Negative” is the sort of melodeath openly and proudly fornicating with metalcore and being all the better for it, whereas bands like Unearth, Killswitch Engage, All That Remains, Shadows Fall, God Forbid, War Of Ages, In Flames or even latter Soilwork come to mind. Strid is a perfect vocalist for the job, alternating between more guttural growls and higher screams and clean vocals, but his highs are what makes him one of the best in metal and “Reflection Wall” is a perfect example, Strid’s highs clear as a bell sounding like a choir, while Koceić whips out a magnifiscent solo worthy of All That Remains’ tragically departed Oli Herbert. I’m sure Strid at least co-wrote all the melodies such as the one in “Controlled” or the closer “Clutching At Rails of Light”. Speaking of it, my favorite has got to be “Lost Circle” with lyrics as if a reflection of Apostle Paul’s words in Romans 7: “So now it is no longer I who acts this way, but sin living in me, for I know that nothing good lives in me, that is, in my flesh. For the desire to do good is present with me, but acting out that good is not, for I do not do the good that I want, but what I do not want—that evil I practice. Now if I do what I do not want, it is no longer I who acts this way, but sin that lives in me…Wretched man that I am! Who will rescue me out of this body of death?” (v. 17-20, 24, REV), and yes, Strid does use the word “sin”, too! I wonder if his hanging out with the Christian metalcorers Demon Hunter while providing guest vocals for the song “Collapsing” on their album “The World Is A Thorn” rubbed off on him, but, then again, his lyrics had always been spiritual and his band Soilwork did influence the likes of spiritual metalcore like Killswitch Engage. Finally, his voice sometimes recalls Leroy Hamp while the matching music the Christian metalcorers War Of Ages, and that many Christian references suggest at least Strid’s increased interest in the Christian faith, which is to say that I am by no means claiming he had become a Christian or headed that way, but it is always pleasant to see secular artists take interest in The Way to whatever extent they choose to extend it. After all, Strid is an intelligent, observant and compassionate observer and commentator of the human condition, and so it’s no wonder that “Negative” is a deeply spiritual album with zero profanity of even a relative kind.

As for other individual performance , it seems to me, after some five applications, that, while Strid is outstanding in his, DiGiorgio curiously, weirdly even, seems subdued, I mean, compare it to Death’s “Human” and “Individual Thought Patterns” when the man was practically omnipresent whereas here the only time he shines is on the closer “Clutching At Rails of Light”, that is, toward the end. Come to think of it, neither was he particularly impressive on the last Testament album. In contrast, the guitar duo Bartulić-Koceić shine like crazy diamonds (to borrow from Pink Floyd), and note that songs like “Controlled”, “In The Depths Of Destruction”, the title track, “Lost Circle” and “Reflection Wall” have double choruses at different paces, all songs have luscious soaring “story-telling” solos, most impressive being Koceić’s in the Megadethly “Your Dark Desires” where he rivals Marty Friedman from “Countdown To Extintion”. The class of the Croatian guitarists is also shown through “weaker” tracks which are, again, MERELY very good, the opener “Puzzle Heart”, “Down That Line” and the latter God Forbidden “Slave” which I likely rate lower because of their single, as opposed to double, choruses and noticeable comparative simplicity.

“Negative” is an album for fans of melodic heavy metal of any genre, why, perhaps it could gain a few non-metal fans because of its overall accessibility, despite some blastbeats and more brutal riffing here and there. The songs are beautifully written, varied and deeply engaging, some even from the first application which reminds me of Solwork’s “A Predator’s Portrait”, “Natural Born Chaos”, Scar Symmetry or Solution.45 albums with that matching crystal clear but still powerful production to boot. And Strid is like in my Top 3 best metal vocalists now. I hope this is not the last we hear from Act Of Denial. Go buy this thing already.