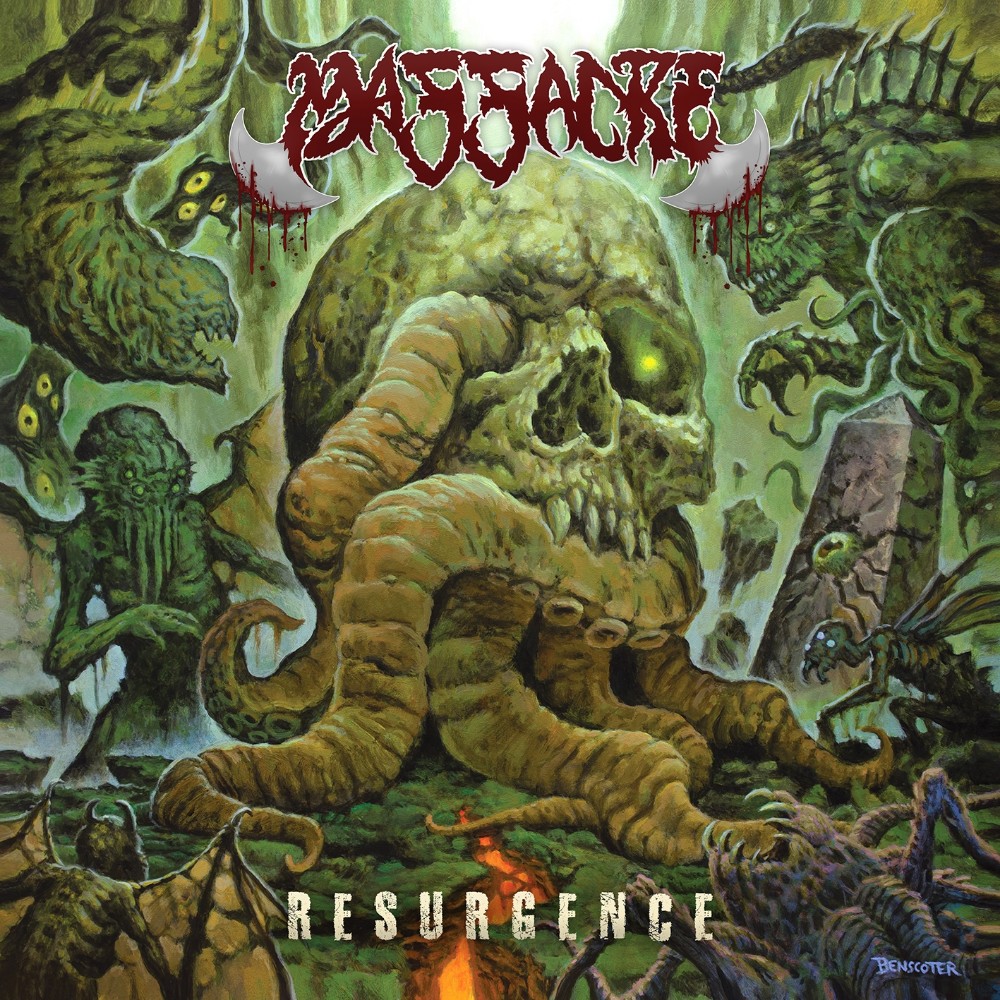 I don’t care what anybody says, "Back From Beyond" was a brutal yet very catchy slab of hardcorish groove/death metal and a worthy follow up to Massacre’s classic debut, "From Beyond". It was also a very good response to the thrash/groove oriented clean sung "Promise" and a natural bridge between the two. It didn’t have the original vocalist or drummer but it did have both the original guitarist and bassist plus a new vocalist who could easily handle deathly growls and hardcore screams. The riffs were fresh and excellent, the songwriting very good, the production meaty and powerful yet wonderfully clear and selective with not much to complain about save a few of lesser quality tracks. This year’s follow up, "Resurgence", which came out on October 22nd, with the original vocalist but all new lineup besides, is a worthy continuance to the classic era of one the death metal’s pioneering bands but one lacking in relevance and innovation in comparing to its predecessor for a barely satisfactory result.

There can be no biography of Massacre without mentioning one of the first death metal bands, Mantas. Mantas was a Californian speed/thrash/black metal trio of Barney KAMalani Lee, Frederick "Rick Rozz" DeLillo and Charles Michael "Evil Chuck" Schuldiner which changed the name to Death as both Lee and Rozz left, Rozz and William "Bill" Andrews forming Massacre joined by Lee a year later and Terrence "Terry" Butler in 1985. While in Massacre, Andrews and Rozz played on Death’s second album, "Leprosy"¹⁹⁸⁸, but Butler, who is also pictured on the album’s back cover, was only credited for all the bass parts which were all actually played by Schuldiner, Butler an actual bass player on Death’s following "Spiritual Healing"¹⁹⁹⁰. All three Massacre members left Death due to heavy personal conflict with Schuldiner and focused on Massacre’s debut album, "From Beyond"¹⁹⁹¹, which was a great success. The following EP, "Inhuman Condition"¹⁹⁹² (after which both Andrews and Butler both left) confirmed that Massacre had no intention to evolve past "Leprosy" stylings but, four years later, due to a break up with his girlfriend, Lee started writing romantic lyrics meant for…the next Massacre album which, together with the drastic change to a more thrash/groove Panteric sound, resulted in the LP "Promise"¹⁹⁹⁶ universally panned by critics and fans with the result that today Lee disavows the album (as vehemently as Pantera used to all that came before "Cowboys From Hell"), all of which led to Massacre breaking up for 10 years, every member going each his own way.

Massacre did reunite in 2006 but for a mere 2 years. More significant was the 2011 reunion which featured returning Butler and Rozz but without Andrews or Lee, whom they replaced with Michael A. Mazzonetto and the previously unknown Edwin Webb, respectively, first issuing a two song EP "Condemned To Suffer"²⁰¹² and then the third Massacre full-length, "Back From Beyond"²⁰¹⁴, which was meant as a follow up to "From Beyond" in title and artwork but wasn’t so much in the stylings, which, well, so what and who cares since it was very good. Nevertheless, Webb left soon after the release and Massacre disbanded yet again. Kam Lee, who had been part of many death metal projects of Roger "Rogga" Johansson, tried to pave the way back to Massacre by way of its two incarnations. According to Encyclopedia Metallum, Kam Lee and Rick Rozz had attempted to reform the band in 2016 as Massacre X, in reference to it being the band’s 10th line-up. Original drummer Bill Andrews then threatened to sue the band over the use of the name, leading to them rebranding themselves as Gods of Death (interestingly, featuring Mazzonetto) in reference to their significance in the development of death metal. They were active under that name until July 2019, the court eventually naming Kam Lee as the legal rightholder.

If you ask Kam Lee about who was initially part of the new lineup beside him he’ll likely tell you "no one who mattered much" but eventually Massacre crystalized as Lee, Johansson and Wombbath’s Jonny Peterson on guitars plus Scott Fairfax soloing, Mike Borders (bass) and Brynjar Helgeton (drums). The 2020 lineup represented the best current old school death metal scene has to offer and that was necessary to serve us with the REAL comeback "from beyond", according to Lee and, listening to "Resurgence", Massacre’s fourth album, it’s hard to disagree. Everything, from the production (handled by one of the scene legends, Dan-Erland "The Man" Swanö) through the guitar stylings and songwriting screams 1992 with some tasteful modern touches. The production I, who normally praise Swanö’s work, have a problem with here, the sound level being clearly lower in the mix than the current average metal release, perhaps on purpose, so as to reflect the "we’re so 90s death" vibe, but it does take away from the enjoyment of the album. Thanfully, the best tracks, such as the spectacular classic Slayerish "Ruins of R’Lyeh" (with a touch of Mastodon) or the excellent "Into The Far-Off Void" are not affected, but that same production emphasizes the mediocrity of "Fate Of the Elder Gods" or Spawn Of The Succubus" or the pointless revisitation of "Corpse Grinder" ("From Beyond" closer), the closer, "Return Of The Corpse Grinder", easily the three worst tracks on "Resurgence". True, I’ve never been a fan of microwaving classic tracks to get new ones in the process but this case just proves me right for thinking so.

In general, for some reason, the first half is easily better and deserving of 4.5/6 score, with good, groovy and fairly melodic tracks like the thrashy "Innsmouth Strain" with some vocal lines recalling Testament’s "Time Is Coming", an Obituary slow down and an excellent and too bad never repeated melody as well as some ancient Paradise Lost leads, or the impressively epic Nilish "Whisperer In Darkness" with the hypnotic Howard Phillips Lovecraftian chanting "Iyah, iyah, Shub Niggurath, the whisperer in darkness!", and, were this quality continued for the second half, I would have awarded the album a 4.5/6, but, sadly, only the aforementioned "Into the Far-Off Void" and "Servants Of Discord" are at that level. Most of the second half is just ooold school death metal done to, well, death and better before – simple, minimalistic and painfully repetitive from track to track.

Overall, "Resurgence" is a mediocre affair, which, if you’re a diehard fan, you’ll likely gleefully swallow, anyway. However, I feel that, despite Kam Lee’s intention to bury "Promise" and "Back From Beyond" with it, he merely manages to succeed with the former because there’s just no way around the fact that the former is just a better, a more thought out, a catchier, a better sounding and, most importantly, a more relevant affair than its follow up. Here’s to Lee realizing that, while death metal should be rooted in its origin it needs to evolve or die in oblivion, which countless old (Monstrosity, Blood Red Throne) and new (Depravity) bands are aware of and take under consideration when planning their music and, hopefully, he will positively surprise us on Massacre’s next installment.

KNIGHTS OF THE REALM – Knights of the Realm