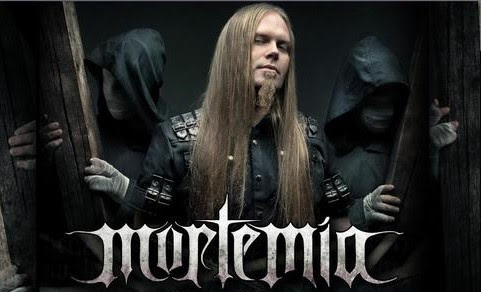 Morten Veland (SIRENIA, MORTEMIA and founder of TRISTANIA) has released 5th Mortemia single from ‘The Pandemic Pandemonium Sessions‘. The song features Melissa Bonny on guest vocals, is entitled ‘Devastation Bound‘.and the official lyric video can be seen below

After 11 years of silence Norwegian multi-instrumentalist, producer and artist Morten Veland is once more active with his solo project Mortemia, this time with a brand new concept. ‘The Pandemic Pandemonium Sessions‘ is a series of singles released on a monthly basis, each song featuring a well known and highly profiled singer in metal. Madeleine Liljestam (Eleine), Marcela Bovio (Stream of Passion, Ayreon, MaYaN, The Gentle Storm, Dark Horse White Horse), Alessia Scolletti (Temperance) and Liv Kristine (ex-Theatre of Tragedy, ex-Leaves Eyes) were the four first special guests on this project. And now for the fifth single Morten has teamed up with Melissa Bonny (Ad Infinitum, The dark side of the moon).

I am proud and honored to introduce Melissa Bonny as my special guest for ‘The Pandemic Pandemonium Sessions‘. The fifth song is entitled ‘Devastation Bound‘, and will be available on all digital platforms on the 8th of October 2021. I discovered Melissa’s musical works a few years back and I have been following her career since then. Melissa has an absolutely beautiful voice that has the power of turning every song she performs into pure gold. I feel truly privileged and thankful to have Melissa onboard this project, and I am really looking forward to sharing this song with you all.

The musical universe of Mortemia is truly fantastic. I discovered Morten’s creations earlier this year and I was very enthusiastic when he asked me to record for him. This song really transports you and gathers so many emotions and power…! I am very proud to be part of it and excited to share it with the world.