The Norwegian symphonic power metal band Nergard are back a mere six months after the release of the critically acclaimed album Eternal White. Now they are releasing a cover of Judas Priest’s epic song ‘Blood Red Skies’ on November 19 via Pug-Nose Records. Check it out here https://orcd.co/4a5dvjd 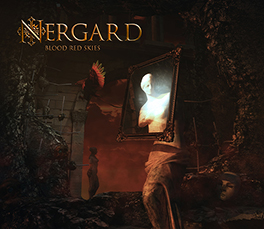 "To me this is THE standout track on Judas Priest‘s 1988 album Ram It Down, and it’s a criminally underrated song. Priest themselves didn’t play this song live until 23 years after the release of the album," explains band leader Andreas Nergård.
"What we wanted to do here is to shine a light on this amazing track and at the same time pay our tribute to the metal gods. I’m sure Judas Priest means as much to any fan of metal as they do to me. The music we play wouldn’t exist without them."

The biggest difference between the original and the new single is that this version is performed as a duet between British singer Stefani Keogh and Mathias Molund Indergård from Norway.

"I’m extremely happy about finally having a steady lineup of full-time members," says Andreas. "We have three exceptional vocalists, and with three members from Norway, one from England and one from Sweden we are now a multinational band. Andi Kravljaca and I have collaborated since the early days of this band, and while he is a very gifted singer, he now plays lead guitar as well. He played guitar on the new album, and he laid down some very tasty leads on this track as well."