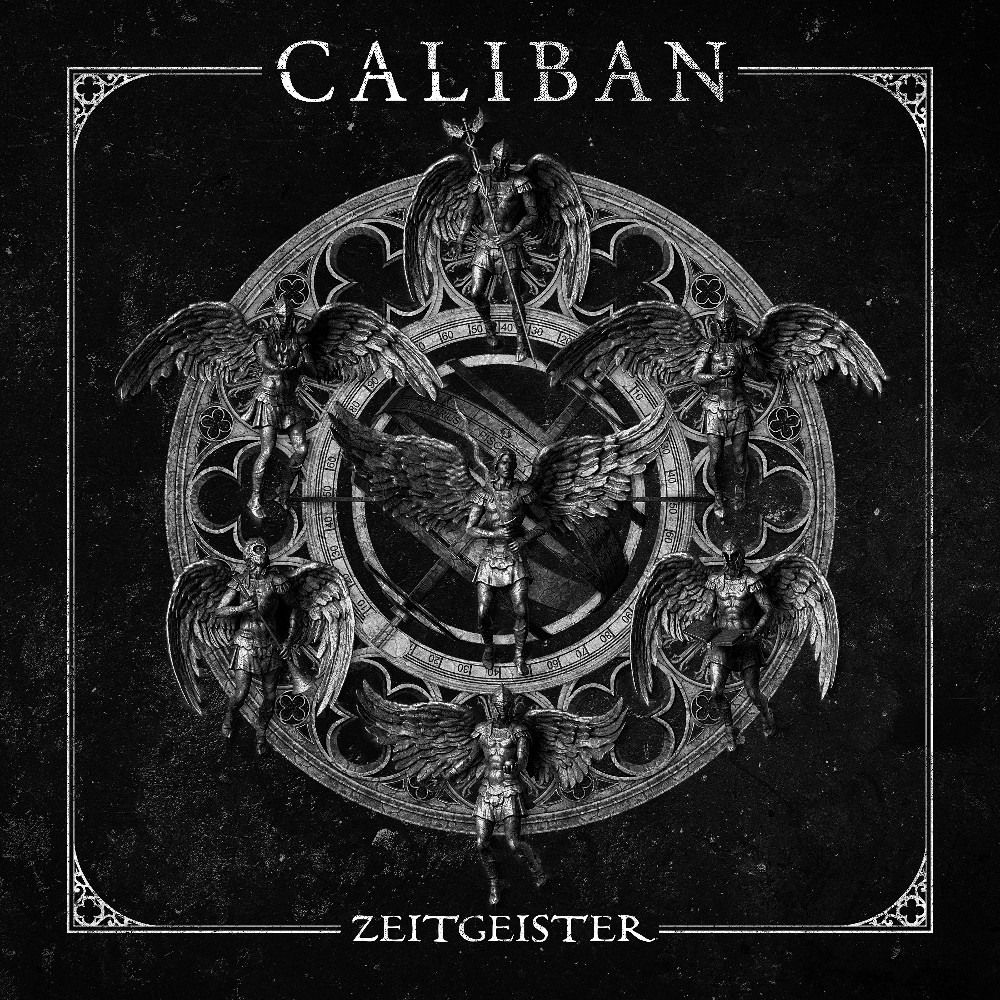 Caliban, named after a character in William Shakespeare’s "The Tempest", is, next to Heaven Shall Burn, with whom they shared a split program in 2000, one of the pillars of German metalcore, but I’ve just recently found out they, like Kreator, come from North-Rhine Westphalian city of Essen where my father and grandmother used to live and my half-brother still lives. The band had got lost in the metalcore invasion I felt and enjoyed back in the opening decade of the XXI-st Century until I heard the excellent 4th album "The Opposite From Within" (2004), heavily inspired and influenced by Killswitch Engage. I had lost track of Caliban after that, having been taken more by what Heaven Shall Burn was doing, but got a chance to review the very good "I Am Nemesis" (2012) which was a very different record showing a growing influences of hip-hop and nü metal. Again, having had lost them off my radar I just recently picked up this here, their 12th album, "Zeitgeister", released a few months ago, to see what additional changes Caliban underwent.

While the material does remind me of both 2004 (in places) and 2012 (a lot) it has its own identity and not just because, inspired by Rammstein, it is sung entirely in German. At times, it is as though the Esseners were aiming to create a separate genre where metalcore, melodeath, thrash, rap and techno could co-exist. Andreas Dörner’s vocals do alternate between screams a’la God Forbid’s Byron Davis and cleans closer to Doc Coyle’s or Killswitch Engage’s Jesse David Leach like they did before but Denis Schmidt’s and Marc Görtz’s guitar riffs are gargantuan in their deathcorish math metal stylings reminiscent of The Acacia Strain, most notably on "Herz" (Heart), and the mediocre "Intoleranz" (Intolerance), the section Marco Schaller (bass) and Patrick Grün (drums) sometimes so in sync with the guitars they recall Fear Factory and that’s all when Caliban is at their very good but not excellent. When they are excellent we enjoy soaring melodies to compliment the heaviness such as on the God Forbidden "Feuer, Zieh‘ Mit Mir" (Fire, Walk With Me), Machine Heading "Nichts Ist Für Immer" (Nothing Is Forever) and the favorite the Kornish and Hypocritical "Mein Inferno" (My Inferno) the last of which very remiscent of the best moments from "The Opposite From Within".

I think German, being one of the coldest human languages, it adds to heaviness and abrasiveness of the sound so Caliban had an excellent idea to make ONE album in their native language but I hope they will return back to English on subsequent records as the melodies don’t quite mix well with German to these ears. I appreciate the thrash and black (Trauma), accapella (the instrumental opening title track) and even rap (Herz) as well as the melodic synths a’la Depeche Mode or Dark Tranquillity (Ausbruch Nach Innen) all of which add flavor to the admittedly mostly enjoyable music which reminds me of God Forbid’s "Equilibrium" or All Shall Perish’s "Awaken The Dreamers" (both excellent records in their own right) but there are times where the quiet, the atmospheric and the ambient kill the momentum, usually around those rapping moments. This aspect should be tightened to allow for a more natural dark/light, piano/forte flow in the future.

Aware of the fact that metalcore cannot evolve from within, Caliban seems to aim to depart from the genre but, in the process of doing so, they reveal that they are still searching for their own niche, which is why "Zeitgeister" is so rough, inconsistent and sometimes even frustrating. However, this record also shows that Caliban should not be ignored and, therefore, I recommend it to old and new fans alike.

EYE OF PURGATORY – The Lighthouse