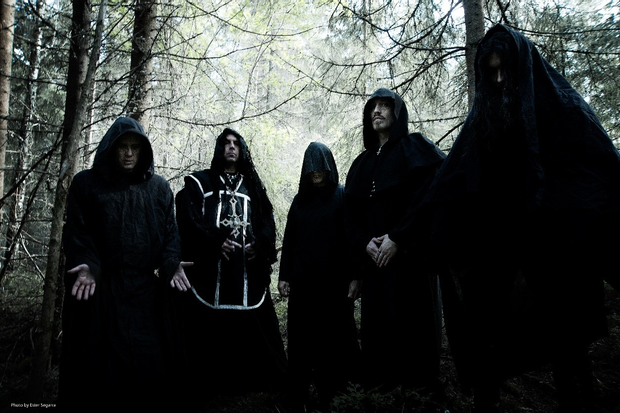 Now the most fearsome black metal band has teamed up with renowned filmmaker Zev Deans to create a visual masterpiece for the song "Black Glass Communion".

Zev Deans comments on the collaboration with MAYHEM as follows:

"When approaching a metal music video, some might roll their eyes and think to themselves ‘how many times do I have to watch a satanic ritual sacrifice before I see something new?’

But for any true Satanist, ritual is an essential part of life that you must repeat again and again with the same sincerity and enthusiasm that you brought to your first time. The very nature of ritual is that it is repetitive, a mantra, a drone that is echoed through different bodies and different times.

In my approach to BLACK GLASS COMMUNION, this truth was unwavering. Now, you must look deep into the depths of the black glass and see what emerges before you."

In addition to the cover versions, a previously unreleased track called "Voces Ab Alta" is featured on the EP, which continues the musical journey alongside "Black Glass Communion" and "Everlasting Dying Flame", which were used as bonus tracks for the 2019 album "Daemon".

The EP thus closes the capital, which was opened with the release of "Daemon" back in 2019 and illuminates the band once again in typical unusual and surprising-sounding way.

"Atavistic Black Disorder / Kommando" (EP) can be ordered HERE and is available in the following formats:

The 3 available graphics make up the overall concept from the already released visuals of the "Daemon" Box Set. The total of 6 graphics were considered as an alternative cover versions of the "Daemon" album and will not be reproduced after this limited edition run.

The Slipmat contains a special print of the back cover (Punk-Head) of this EP!

Only a few left!

In Defense Of Our Future (Discharge Cover)