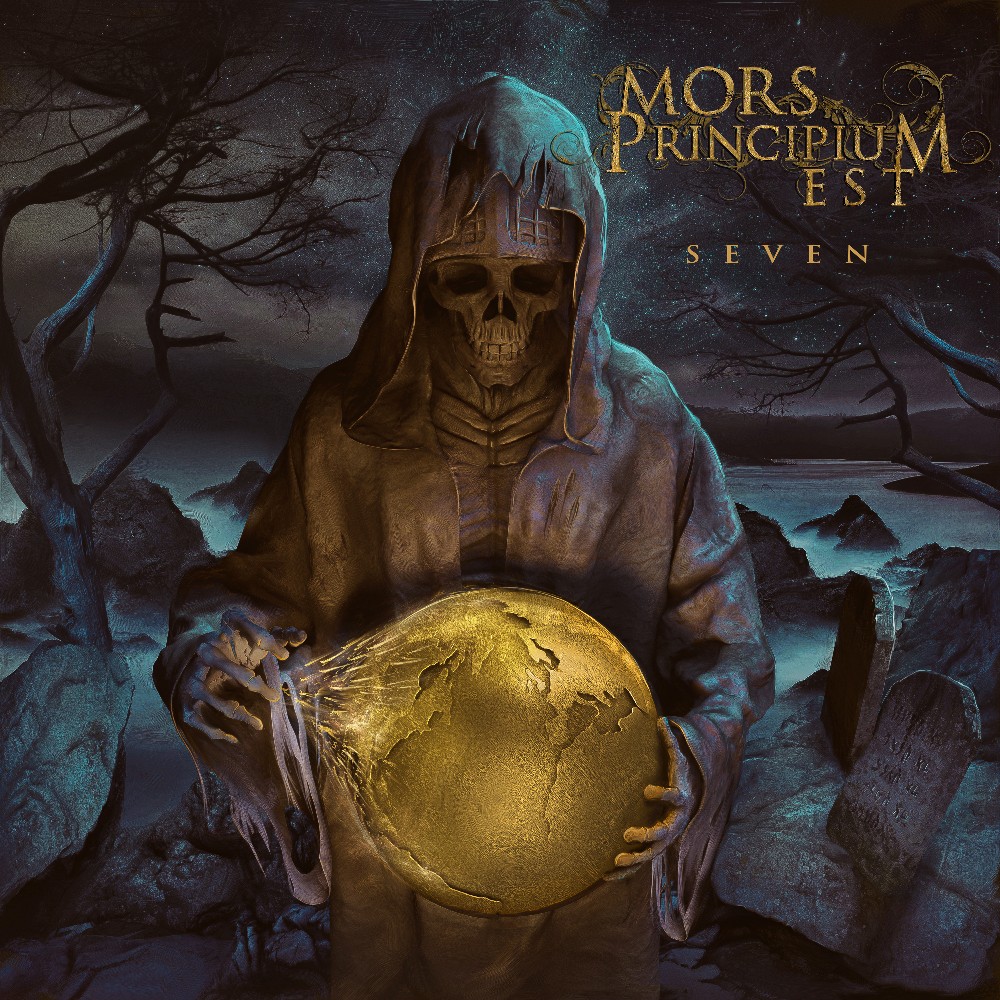 Having been a reviewer for over 13 years I am aware of how one’s ability to objectively assess a given album increases with time, including the ability to look back on past scores and wince in disbelief. It’s easy to pick those moments when we have overrated an album, harder, when we’ve underrated it. For me, "Embers Of A Dying World" (2017), the previous album from the Finnish symphonic melodeathsters Mors Principium Est (MPE) is an example of the latter. Not only had I given it a 4/6 score when it deserved a 5/6 but I had sarcastically renamed it "embers of a dying melodeath". Meanwhile, while MPE is deeply rooted in death (the band’s name Latin for "death is the beginning" or "…the basis" or "… the ruler), it is far from dead but actually is a vibrant, thriving and fairly original piece of symphonic melodic death metal which is true of as much of "Embers…" as of this here, brand new offering, "Seven". In fact, since 2012, MPE has become better, catchier and more convincing in comparing to their beginnings.

Death had had its beginning in 1999 when vocalist and lyricist Ville Viljanen, guitarists Jori Haukio and Jarkko Kokko, bassist Teemu Heinola, keyboardist Toni Nummelin and drummer Mikko Sipola began to pitch three consecutive demos: "Before Birth" (2000), "Valley Of Sacrifice" (2001) and "Third Arrival" (2002) with the result of securing a contract with Listenable Records and the subsequent releases of 3 albums: "Inhumanity" (2003), "The Unborn" (2005), and "Liberation=Termination" (2007), with solid symphonic melodic death metal. I remember hearing "Liberation…" for the first time and noting very technically impressive guitar work reminiscent of Darkane as well as symphonic wizzardry of Dimmu Borgir with occasional, even sporadic melody somewhere between In Flames and Dark Tranquillity. I bemoaned the scarcity of melody as opposed to abundance of technical fast riffing whereas the melody appeared as if it were a rain in a desert. Whether or not the departing keyboardist Nummelin (2004) and guitarists Haukio (2006) and Kokko (2009) had felt the same way, MPE found themselves without the instrumental base and without a label subsequent "Liberation…".

Thankfully, British multi-instrumentalist Andy Gillion joined along with guitarist Andhe Chandler while a contract with AFM Records was signed which persists to this day. Subsequent "…and Death Said Live" (2012), "The Dawn Of The 5th Era" (2014) and the aforementioned "Embers…" presented a more balanced and more melodic sound, Gillion’s instrumental and songwriting neoclassical talent full on display. Meanwhile, Chandler left (2014) replaced by Kevin Verlay for one year, leaving Gillion the sole guitarist yet without a detriment to the sound. When drummer Sipola left after "Embers…" and bassist Heinola before "Seven", for the first time, MPE became a duo of Gillion handling the multi-instrumental and songwriting aspect and Viljanen vocals and lyrics.

Many bands would have collapsed under that kind of pressure (likely made stronger under the global COVID-19 pandemic) but MPE soldiered onto album number seven, that’s why so titled. The results are, while sonically and qualitatively similar to the predecessor, somehow more impressive given the circumstances surrounding the recording. Like on "Embers…", the opener is just good but only a hint of the greatness to come (although on the former it was an intro followed by a first song proper while "Seven" has no intros but hits rightaway with the profoundly symphonic "A Day For Redemption"). Like its immediate predecessor "Seven" has several perfectly melodic tracks: the favorite double-chorused "Lost in A Starless Aeon", the power metallish "March To War" with the guitarwork reminiscent of Helloween’s "Walls Of Jericho" as well as AC/DC’s "Thunderstruck" (the opening chords) and, finally, the closing slightly metalcoreish "My Home, My Grave" with hints of Johann Sebastian Bach and Revocation. And, like "Embers…", that does not mean that the remaining tracks are less melodic, as in the case of the Darkaneian "In Frozen Fields" which also recalls Cradle Of Filth from their debut "The Principle Of Evil Made Flesh" (1994) with a soaring chorus and old In Flamesian verse melody, or the excellent thrasher "The Everlong Night" with a bridge riff a’la Carcass’ "Black Star" and a fantastic Hypocritical chorus, and definitely the dirge-like "At The Shores Of Silver Sand" with a The Black Dahlia Murder riffing and Extollic chorus a’la "Ember" or Trivium and a personally relatable lyric "nothing can hurt me/I have built my shields so strong that life cannot touch me". And, of course, everything is bathed in rivers of cascading solos bordering on virtuosic with frequent border crossing.

Yet for all my bemoaning of the unfair score I had given to "Embers…" some of my criticism was justifiable as then as it is now. On both albums there are tracks which could have used more melody or variety, in "Seven" case, besides the opener, the melodically austere "Master Of The Dead" or the melodically and aggressively balanced yet dissapointingly short "Rebirth" in which the transitioning riff strongly recalls Killswitch Engage’s "The End Of Heartache". While it happens less and less, especially in comparing to their past, MPE still has the tendency to starve a song for melody until the listener begs for it. And, finally, the instrumental "Reverence" is just as pointless and superflous on "Seven" as "Agnus Dei" was on "Embers…". None of these flaws merit more than 1 point deduction in BOTH cases, though, so, too, 5/6 is well deserved.

While I owe Ville Viljanen and Andy Gillion a big fat apology for misjudgment of their previous album and the resulting low score, I hope I remedy it in this review. I think "Embers…" and "Seven" are equally excellent works of art and Andy Gillion is one of the best composers in metal, while Viljanen is an excellent producer. Clear is, though, the tendency on the latter album to get away from some of the romanticism and gothic rock influence of the former while pursuing a more direct, more deathrash direction, which is all to the duly noted improvement. So, overall, If you loved "Embers…" you won’t be disappointed in "Seven". I am looking forward to more music from this excellent duo.

HATEBREED – Weight Of The False Self