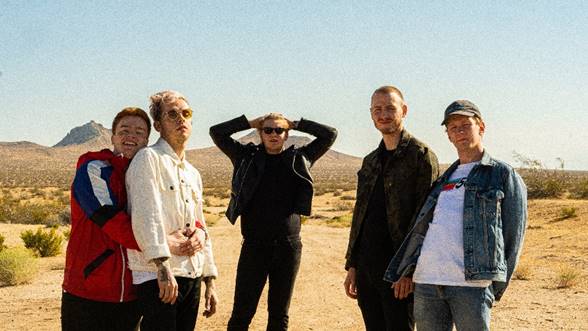 It’s been over two years since LÜT released their critically acclaimed album «Pandion» giving their career a flying start in their home country. The Norwegians are now finally ready with new music. Their sophomore album "Mersmak" (Eng.: Taste for more/Wanting more) will be released on January, 8th.

"We went through highs and lows writing this album, and it was definitely a learning process which made the band stronger as a whole. As such; making this album has been a type of contemplation. We’re excited to have finished the ‘difficult second album’ and couldn’t have hoped for a better result. It’s great to finally be able to show the world what we’ve been working on." Says vocalist Markus Danjord.

The band has made some changes to the line-up the last year, and guitarist Mads Ystmark (Heave Blood and Die) has replaced the former members Hans Marius Mikkelsen and Viljar Ratama Dunderovic. Since the change of members, the band has spent the past months both abroad and in Norway, finishing their next album.

"We are very pleased with the new line-up. During this writing process, we’ve worked closer as a group than before, something we feel is working very well for us. We’re proud to present "Mersmak" as our first single and hope that the people like what they hear", says guitarist Ørjan Nyborg Myrland.

Ever since they started up in 2014, LÜT has been a band that stuck with the rock audience, making a name for themselves in Norway. They have done several memorable concerts filled with stage diving, explosions of energy, mosh pits and big riffs. With their debut album, LÜT was nominated for "New band of the year" in both the Norwegian Grammys Spellemannprisen and the Norwegian Radio award show P3 Gull. Lars Ulrich has also praised them on this podcast "It’s Electric". The band have played on big festivals like Summer Breeze Open Air, Reeperbahn, Øya and Tons Of Rock, as well as several other Norwegian festivals.