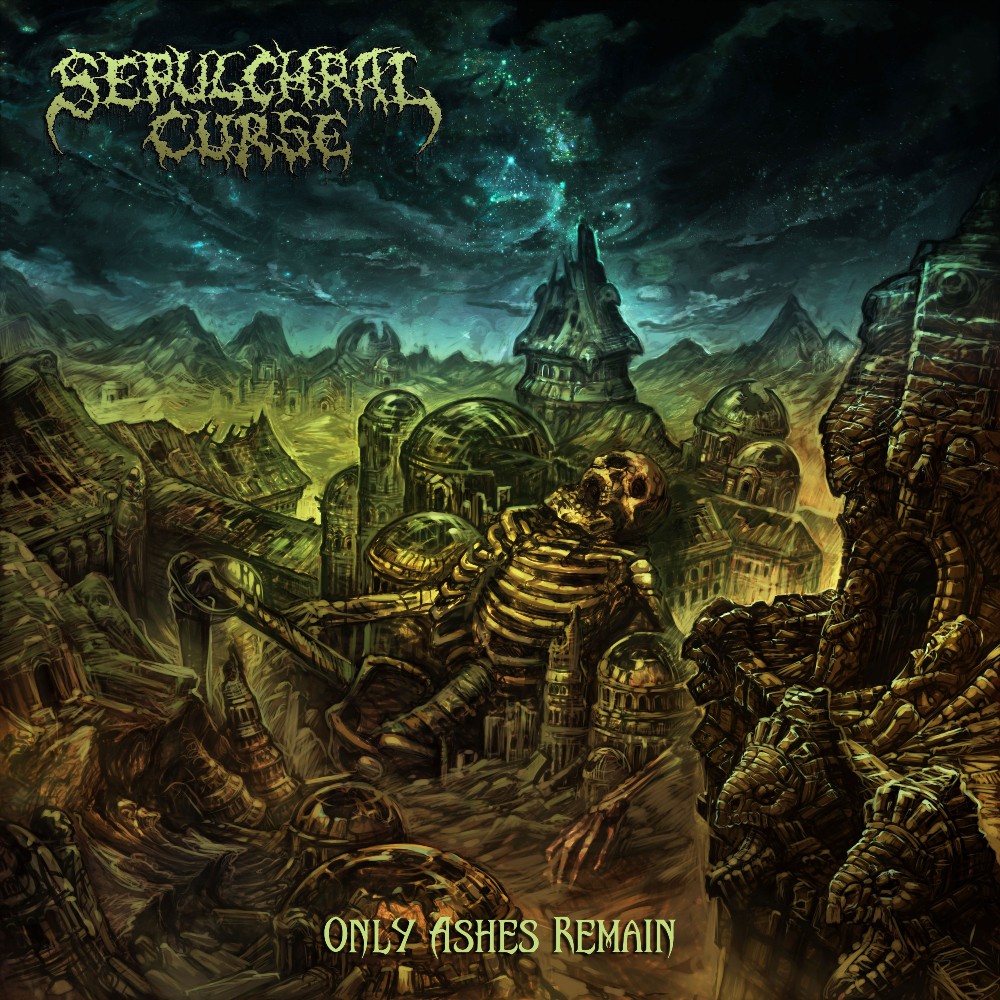 I’ve just recently reviewed the excellent Church Of The Dead eponymous debut and in that review I claimed that Scandinavian old school death metal was eating its own tail. Well, it seems not only Church Of The Dead set out to prove me wrong but now fellow countrymen, Turku, Varsinais-Suomi, Finnish death/doom/black metal quintet Sepulchral Curse aim to pulverize me and my prejudice with their excellent debut (after 2 EPs: the 2014 "A Birth In Death" and the 2016 "At The Onset Of Extinction"). "Only Ashes Remain" is a truly old school effort with a somewhat modern approach where skills, brutality and melodic songwriting are combined for an unforgettable experience.

What makes this album truly memorable is the 50/50 brutality/melody ratio, so elusive to so many. Kari Kankaanpää (vocals), also for Solothus), Jaakko Riihimäki (guitars), Aleksi Luukka (guitars), Niilas Nissilä (bass, backing vocals) Tommi Ilmanen (drums, backing vocals) may comprise a new band but these guys both play and sound like heavy metal experts, as if they had played this kind of music since they were born. They have amazing skills as instrumentalist and songwriters and they use their influences (Swedish old school death, classic melodeath, Peaceville, old school Florida, etc.) smartly and in the right proportions so, in the end, they come out sounding very original and innovative. Frankly, these guys really sound like they’re having plenty of fun making extreme metal.

Most of the tracks are highly stratified, back and forth genre and pace affairs deserving no less but a 4.5/6 mark each. Highlights include the powerful Hypocrisy-ic and old school Death-ly opener "From Within The Bowels Of The Earth" which also strongly recalls Emperor’s "Curse You All Men" (from "IX Equilibrium"), the old Edge Of Sanity-arian and Peaceville laden (especially Paradise Lost and My Dying Bride) melodic scorcher "Dead Stars Drawing Spirals" (where I dare your head not to headbang through the verse riff) and the coup de grace and album’s absolute perfection, the closer "Maan Tuhkien Uneen", a whopping 11 minutes of everything you love about this album and extreme metal music, with now a very Novembers Doom "Pale Haunt Departure" sounding riffs now insane drums and guitars and more changes on a dime than on Opeth’s "Ghost Reveries", the track sounding like a fierce battle but one where you don’t get tired even though you feel as though YOU are the one fighting, it keeps going and going like they just want to spend the last ounce of energy and finally a riff and a receding scream end the battle.

What stops this excellent disc from achieving a 5.5 or more score is the tendency to sometimes overbrutalize or oversimplify such as in the least favorite Immolation-ary "Church Of Loss", but these moments are few and, besides the track comes after the excellent "Eyes Inside" full of seemingly simple but very effective, shall we say, classic, Malevolent Creation-ary riffs, so it doesn’t create an impression of needless elements. And, hey, this is still a debut so let’s give them a break.

Frankly, the best thing since Malevolent Creation’s "A Fine Art Of Murder" (2000), Sepulchral Curse’s debut is one of the finest opening salvos in recent memory, right next to the aforementioned Church Of The Dead eponymous. The massive, perfectly death metal sound, the melody which can get downright romantic (Maan Tuhkien Uneen), the insane back and forth, mostly excellent songwriting – it all makes it a must for any fan of extreme metal. In fact, if you don’t like this disc you don’t like extreme metal, or, perhaps, even heavy metal at all. I cannot reccomend this enough even mindful of the flaws. Just play track number 7 and wallow in heavy metal perfection.

DKHARMAKHAOZ – Proclamation Of The Black Suns