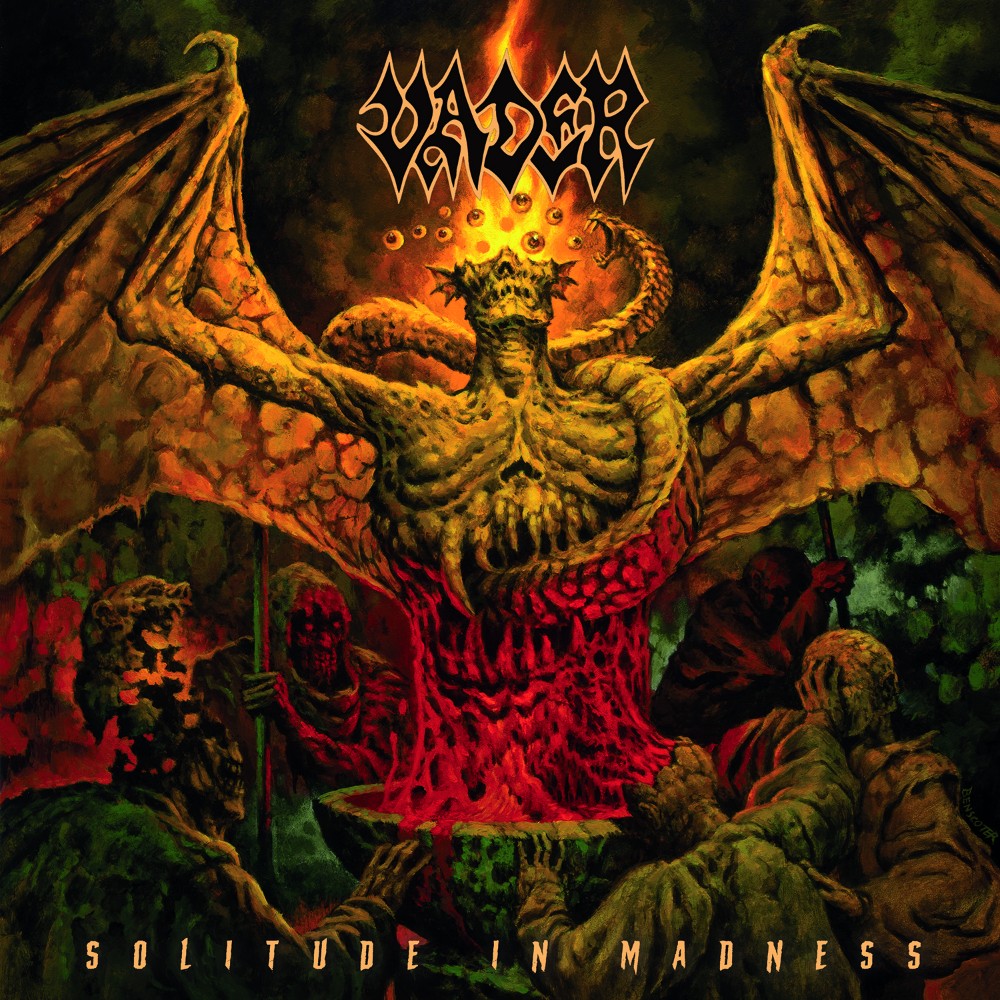 Before Azarath and Behemoth there was Vader, indeed, the first Polish export death metal band, which started off as a heavy/speed metal construct in 1983, in Olsztyn, Warmia-Masuria, and eventually embraced a death metal sound with reminiscences of thrash, according to Encyclopedia Metallum. Vader was named after the Sith Lord Vader, the dark alter ego of Jedi knight Anakin Skywalker from the "Star Wars" saga. Initially, Vader’s logo had a subdued Vader’s infamous helmet, but Vader changed the logo and dropped the image in 2005. They issued 3 demos: "Live In Decay" (1988), "Necrolust" (1989), and "Morbid Reich" (1990), and the third one, released by Carnage Records, became the best selling death metal demo of all time, attracting attention of Earache Records, which issued their debut full length, "The Ultimate Incantation" (1992).

My exposure to this thrashened death metal ensemble, today consisting of Piotr Paweł "Peter" Wiwczarek (vocals, guitars), Marek "Spider" Pająk (guitars), Tomasz "Hal" Halicki (bass), James Stewart (drums), started with the 2nd album, "The Profundis" (1995), leaving me moderately impressed, and, although I continued monitoring the development of their sound through "Future Of The Past" (1996), "Black To The Blind" (1997) and "Litany" (2000) I have lost interest after "The Art Of War" EP (2005) (even though it was not too bad), briefly visiting only "Tibi Et Igni" (2014). Unlike Behemoth or Azarath who I appreciated for excellent and innovative songwriting, Vader always reminded me of the likes of Deicide or Unleashed, far from a box of chocolates, you knew exactly what you were going to get – no frills, technical, sometimes catchy death metal.

As we say in the second country of my citizenship, USA, the more things change the more they stay the same. On "Solitude In Madness" (which I impulsively picked up from the Head PR email in one of those "Back To The Future" Dr. Emmet Brown’s "I figured what the hell" moments) Vader does what Vader always did, slays you with exorbitant speeds and technicality which tend to be somewhat catchy but instantly forgettable as evident on the opener, "Shock And Awe" or "Final Declaration". "Into Oblivion", "And Satan Wept" and "Emptiness" are a little better, varying the speed and adding much needed melody here and there. But the "Divine Intervention" Slayer-ic hardcore-ish "Incineration Of The Gods", and Megadeth-ian thrashy "Sanctification Denied" as well as Obituary-ic "Bones" are actually excellent, surprisingly mature and memorable affairs. If all tracks were like that you’d see a much higher score, but that’s not the only reason.

What makes this album worse is another three-set of tracks: "Despair", "Stigma Of Divinity" and "Dancing In The Slaughterhouse". The first two are some of the most run-off-the-mill "Reign In Blood" B-sides you can imagine and "Dancing In The Slaughterhouse", well, I was relieved upon learning that it was actually Acid Drinkers (Polish thrashers) cover. Had it been an original Vader song I would have had to deduce additional half a point from the score, it’s that terrible.

According to my expectations, Vader neither disappoints nor excites with their new album. An extremely short, nearly 30 minute affair, it brings nothing new to my table. There are some signs of great songwriting which is, overall, wildly inconsistent and, admittedly, the craft is top notch especially the leads, so if you liked them before you will most likely continue on. As for me, I’m falling back into my Vader-ignorant slumber.

ULCERATE – Stare Into Death And Be Still