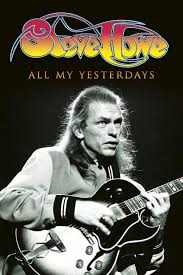 The legendary Yes guitarist Steve Howe surely needs no introduction as he is undoubtedly one of the most talented and innovative musicians to have come out of Britain, which is saying something. While his utterly impressive and revered work with prog rockers Yes and the slightly more commercial outfit Asia speaks for itself, his solo offerings as well as his many collaborations with other notable and gifted musicians such as Steve Hackett and Keith West are also noteworthy. To these ears, one of the best and most thorough summaries of (and introductions) to Howe’s legacy is the “Anthology 2: Groups and Collaborations” 3CD set released by Rhino Records, so make a note of that one if you have not already familiarized yourself with its content. But as usual, I digress, so let us get back to the topic of discussing this newly released autobiography of Howe’s and what it contains, shall we?

The great thing about “All My Yesterdays” is that it covers Howe’s nearly sixty years of active service in the music industry in a sufficiently detailed manner while simultaneously offers an interesting perspective on just how much rock and progressive music have evolved since Howe made his recording debut in 1964. His recollections of his upbringing in London and the club scene in the 60s are marvelous and there are quite a few funny anecdotes and stories that I guarantee will put a huge smile on your face. The Yes years are also elaborated on and as is often the case with biographies and autobiographies by musicians, the chapters on the formative years of a group’s career are the best and most compelling ones to immerse oneself in and that is exactly the case here too. I very much enjoyed the pages detailing Howe’s triumphs and failures with the underrated Asia and how that ensemble worked together (although sometimes things fell apart and the members did not function as a cohesive musical unit). Still, the drama surrounding Asia is nothing compared to that of Yes as “All My Yesterdays” also indicates and (ever so politely) states from time to time. Having said that, perhaps my favorite part of Howe’s narrative is the time he spent playing pubs and bars with The Syndicats, one of the very first bands he ever trod the boards with. If you have never heard the ridiculously brilliant tune entitled “On the Horizon” by those guys, please do so asap – it is psychedelic British pop/rock at its best.

Some thought-provoking insights and philosophies are provided by Steve throughout his narrative, but the frustrating thing about these 319 pages is that they reveal very little of the man himself, his personality, and who he is. Details about his private life (or rather, his own private thoughts on certain matters) are often-times vague or even entirely absent, which is puzzling as there are countless situations and contexts in this otherwise well-written piece of literature where it feels as if so many things are left unsaid by Howe. There is a level of ambiguity in the text that is impossible to penetrate now and then, and at times it feels a little too guarded and protective somehow. Mr. Howe spends a substantial amount of time discussing various guitars, their traits and characteristics, his passion and love for the instrument, his fondness of quality cars, how much he treasures his family life, and how inhumanly hectic his schedule has been for the past fifty years ever since he joined Yes. Personally, I do think that the book should have elaborated on and discussed in more details just what makes him tick as a human being and what drives, motivates, and pushes him forward. Not merely in terms of his creativity, but, like I said, as a human being.

In summing up, “All My Yesterdays” is an informative read and it is a mandatory buy if you are a fan of Yes, Asia, and/or Howe’s many captivating solo records, but it feels neither intimate nor revelatory, which is a bit of shame considering just how pivotal a figure in prog rock the great man is and what his music means to so many out there. One never really gets underneath the skin of this highly skilled artist, but on the other hand, it provides us with a thorough and chronologically structured exploration of all his creative endeavors over the years, which, after all, is the most important thing. So in short, “All My Yesterdays” is interesting and informative rather than remarkable or outstanding.

DEMISE OF THE CROWN – Life In The City